Homepage > Tarifa, in the Year of Landing

Tarifa, in the Year of Landing

Al-Walid ibn Abd al-Malik, sixth Umayyad caliph, was playing with his son in the large room, next to an ablutions pond in his Damascus palace when two messengers simultaneously brought him news from the bounds of his kingdom. The first announced the conquest of Transoxiana, in Central Asia, the second the success in the Strait crossing in the West. The Umayyad Caliphate had just set foot on the land of the Vandals, Al Andalus.

Their king Witiza had just died when Luderic seized power neglecting the legitimate succession of any of the three sons. In addition, Luderic, aka Don Rodrigo, had a dispute with a subordinate, a dark character in the story that could have been a Byzantine Exarch. Someone who the Berbers from Ifriquiya, the new province of the Caliphate of Damascus, called Yulyan, Lord of Septa, Ceuta. This, eager to avenge a personal affront, met the governor of Ifriqiya, Musa bin Nusayr, in the city of Kairouan. Musa in turn wrote to the Caliph of Damascus to explain the situation and testing the potential benefits to be obtained. Al Walid replied: Send detachments to that country, explore it and make accurate reports and do not expose Muslims to the chances of a rough waves sea.

In 710, Yulyan landed with a few men where they called Al Yazirat Al Khadra or the green island, future Algeciras, looking for an encounter that will serve as an excuse to ask for overseas help. That same year a governor Musa lieutenant was sent to check. He was Abu Za’rah Tarif ibn Malik al Mu’afari who, with a group of men not determined, some sources indicate that were four hundred, and others talk about three thousand, landed on a small island connected by a narrow strip of land in the southernmost point of the Iberian Peninsula. It was the island now known as Isla de las Palomas. Doves’ Island. In his honour would name the place Yazirat Al Tarif, Tarifa. 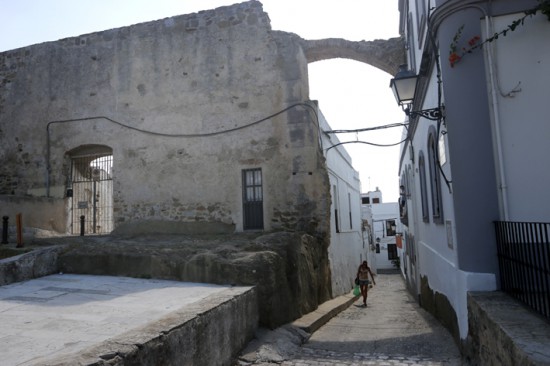 The following year, 92 AH, and between April and May 711 AD, Musa decided to send a stronger force. He commanded Tangier governor, Tariq ibn Ziyad. Twelve thousand men, Berbers and Arabs left Tangier, Ceuta and Ksar to anchor next to which would be called Jabal Tariq, Tariq’s Mountain or Gibraltar today. On July 19 Christian and Arabic troops met nearby Barbate, at Laguna de la Janda, in what would be known as Battle of Guadalete and in which the Visigoth ruler, Luderic or Don Rodrigo, disappeared. The decomposition of the kingdom favoured the advance of Muslim troops. Same year’s November they had already conquered Toledo, the capital, and in five years they had seized virtually the entire peninsula and beyond the Pyrenees occupied Toulouse in Septimania and Narbonne. Only the Frankish Charles Martel would stop them in Poitiers.

Tarifa retains the Castle of the Guzman, work of the first Al Andalus Umayyad caliph at the point where previously were Phoenician and Roman fortresses. Abd ar-Rahman III distrusted their Fatimid Ifriquiya neighbours ordering the fortification of the city that was finished in the month of Safar of the year 349 of the Hegira, 960 AD, as stated on a plaque above the door where it is recalled that In the name of God the merciful and gracious... God's servant Abderrahman Emir Almuminin God preserve life ordered constructing this fort. In 1273, Abu Abdallah Mohammed, second Nasrid king lend Tarifa and Algeciras to the Marinid Dynasty men who defended it in behalf the Kingdom of Granada. The Castilian monarch Sancho IV seized Tarifa in September 21, 1292 giving its defence to Alonso Pérez de Guzmán who stared the famous episode in which he denied the surrender of the city even in exchange for the life of his son, Pedro Alfonso, throwing his own dagger to the besiegers that put him to death. The starring tower is the flanking octagonal tower, Torre de Guzmán el Bueno, linked to the rest of the fortress by a 130 feet long wall. 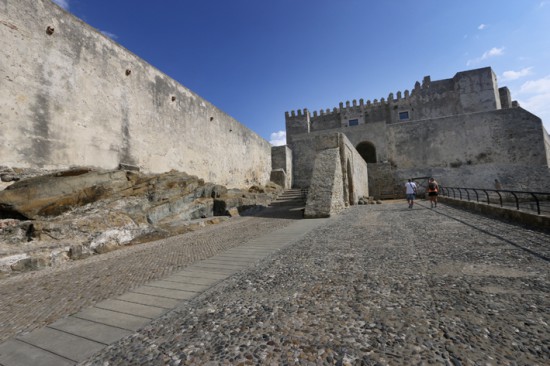 The city also retains some of its ancient walls and the Puerta de Jerez. From other two gateways, the Puerta del Retiro and the Sea Gateway or Almedina just rest the memory of the place where they were opened, the first by the street Calzadilla Tellez, where the wall is lost and stands a statue dedicated to General Francisco Copons y Navía, city defender during the Peninsular War. Where Almedina gate once stood now there’s a fountain and some stairs leading down to Calle del Mar on the way to the castle. By the stairs, above the bars of a window, two withwashed faces impassively stare passersby.

Inside the walls the medieval streets layout include names like Hope and Peace. Where once stood the mosques today stands the churches of San Mateo and Santa María.

The 711 landing places have changed dramatically. Al-Walid ibn Abd al-Malik would be stunned with some of his citizens speaking English where Jabal al Tariq has become the Rock. The Green Island, Al Yazirat al Jadra or Algeciras, is one of the main ports of the Mediterranean and base for the ferries linking the mainland with Morocco. Windy Tarifa is an all year round paradise for windsurfers and kite surfing fans. 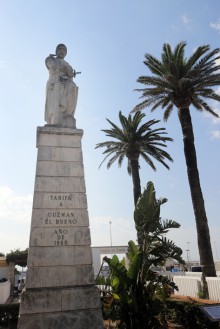