Homepage > The Celts (no filter)

The Celts (no filter)

As French schoolboys, no matter where do they born, were inculcated in the notion that their ancestors were Gauls, even in any of the tiny Polynesia Islands or any Amazonian tribe in Guiana, Spanish pupils sought to identify with celtiberic roots, regardless these were Iberian-blooded or just Celtic. When I began to form an initial idea of ​​what or who was a Celtic, I got a picture in mind: a blue-green bearded gentleman wearing a weird skirt, and brandishing a sword over his head crowned with a horned helmet. My grandfather smoked them unfiltered. On Sundays or holy days he bought them filtered. I had not yet seen any copy of the Goscinny stories drawn by Albert Uderzo, so I didn’t meet Asterix neither I got no idea about where to find Hallstatt or La Tène on a map. 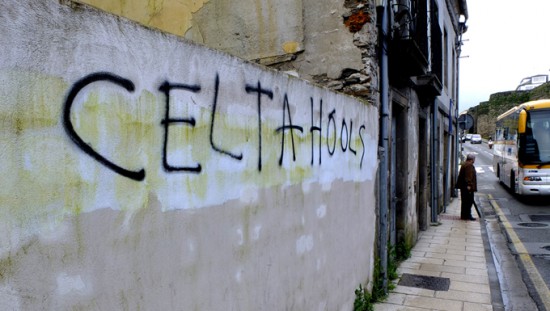 Hallsttat in Austria and La Tène, in the Swiss Alps, northeast of Lake Neuchâtel, were the cradle of burial urns cultures developed between 1200 BC and the end of the Iron Age among the nucleus of the Celtic talk tribes that spread throughout central and eastern Europe up to the British Isles, the Iberian Peninsula and Asia Minor. In these territories they built fortified towns, usually on top of hills and hillocks of easier defence, many still preserved.

Greeks, Herodotus of Halicarnassus quote in his Historiae, know them as keltoi and its geographical area as keltiké, locating them to their sunset. Eastward learned of its existence with the sacking of Apollo’s temple and oracle at Delphi by the Anatolian Galatian tribes, the same those three centuries later, Paul of Tarsus, St. Paul, devoted one of his Epistles in the New Testament, the Epistle to the Galatians. The Greek Diodorus Siculus in the first century writes that virtually there’s no province where the Celts have not left some monuments behind their way ... everywhere where Phoenicians and nomads are found to arrive the Celts or Gauls had established before. Although the first written record is ought to Rufus Festus Avieno, the Latin poet who, five hundred years before Christ, wrote about them in Ora Maritima. In 387 BC the Gallic leader Breno presented his credentials creating indissoluble ties with Rome. They sacked the city. Three centuries later a Roman proconsul considered further strengthen the bond that united the two peoples. Roma invaded them. This was Julius Caesar, who helped to extend the existing evidence about the Celts in Commentarii De Bello Gallico. In his notes on the Gallic War Caesar discovers parallels between Celtic and Roman gods, talking about the Druids and obviously detailed, in seven volumes, Roman military campaigns.

Rome occupied most of the territories inhabited by Celtic societies, from Galatia to Britannia and Lusitania. Just left out Pictish tribes who inhabited the north of Hadrian's Wall in today Scotland and Hibernia, Ireland. The fall of the Empire and the barbarian invasions cornered the Celts who were not romanized west of Great Britain, Wales and Cornwall. Anglo-Saxon pressure led emigration to the mainland, by current French Normandy and Brittany spreading Celtic language. Is opposing invasion when a legend is born about a Briton chief who defeated the Saxons at Mons Badonicus, fact reflected in the sixth century by the monk Gildas in De Excidio et Conquestu Britanniae and associated in the anonymous Historia Brittonum with legendary King Arthur.

The arrival of Christianity to the islands also motivated the export of holy evangelists to the Atlantic coasts of Europe. They were responsible for modifying the pagan ancient worship, being Roman or Celtic origin. Ancestral cults that existed in the islands to ancient heroes as Manannan, or the Tuatha Dé Danann, probably derived in worship to St Anne, becoming patron of Brittany. Also here ancient menhirs were crowned with crosses or the old god of abundance and wild animals Cernunnos as been transformed as part of a calvary with a crucifix between its horns. The almighty god Lug have given, among others, the names of Lugo and Lugones in northern Spain or Lyon, Lugdunum in Latin, in France.

Celtic Christianity in the British Isles inherited art forms originating from La Tène. Vegetal motifs, trisquels or ternaries forms, zoomorphic ornaments and other geometric abstractions were refined reaching its zenith in the illuminated manuscripts of the scriptures, in the Kells or Durrow books or in the Lindisfarne Gospels.

In London, the British Museum holds a large collection of objects of Celtic origin: bronze jars made to contain wine, helmets and weapons, domestic functional parts and items of jewellery and coins found in recent archaeological hoards in Britain. It is unique the ornamental helmet found in Waterloo Bridge in the British capital itself. In Edinburgh, the Scottish National Museum exhibits Pictish slabs from the first millennium, the culmination of the Celtic cultures in the West, where animals are depicted as boar, bears, oxen, probably with magical connotations.

The Romanticism taste for ancient archetypes recovered Celtic myths even creating new ones. Celtic Crosses built in the early Middle Ages in Ireland to increase the prestige of the monasteries were raising now on the cemeteries tombstones providing a completely different use. Poets like William Butler Yeats rescued old stories and fairy tales about little people giving the Gaelic folklore literary base. The rise of nationalist ideologies in the nineteenth century, use widely the existence of archaic sources to feed its own myths. Today, what has been called Celtic nations are areas that have been preserved in some way a common cultural traits and especially the language in one of its variants, the P group or Q group, named thus according to the evolution of its consonants. Belong to the first group Welsh, Cornish and Breton, and Irish, Scottish Gaelic and Manx to the second. Everywhere experienced a decline against the push of English. In Cornwall was long ago gone and hardly is used in Man, argument used in Galicia to not feel outside the definition of Celtic Nation.

In recent decades is through music where has been found some new common bond, from Scottish bagpipe to the galaic one, from folk variants of the Breton Alan Stivell to the melodic Loreena McKennitt or Enya through The Chieftains, Gwendal or The Corrs, from Galicia Carlos Nuñez and Cristina Pato to Filska in Shetland islands, many of them gathered in the Celtic music festivals held annually in Europe, and even in Argentina, Cuba and Canada.

And in the world of sports teams do not hesitate associating his name with that of ancestors, from the basketball Boston Celtics to countless Celtics in soccer, as Glasgow Rangers, Celtic Vigo ... although perhaps now the only thing to fear less is the sky will fall over their heads.