Homepage > The City into the Palace

The City into the Palace

Illyrian, born in Salona, Dalmatia, Gaius Aurelius Valerius Diocletianus reached the summit of power in Rome on November 20 of the year 284, establishing a governance reform that became known as the Tetrarchy, dividing the state control between two Augusti and two Caesars, between East and West. When in the year 305, he was 59 year old he retired and returned to his homeland where he had erected a monumental palace that eventually would contain a city inside. Spalatum for the Romans, Spalato to Italians and Split in Croatia. 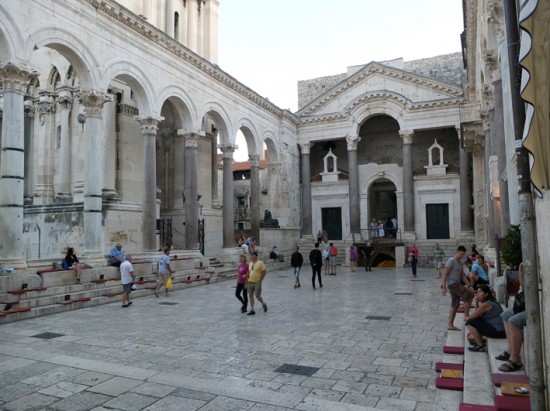 In a rare case where the dereliction of duty did not involve the abandonment of this world, Diocletian moved into the large house he had built near Salona, close to his origins and by the Adriatic waters. Once he was asked to return to resume power leading the empire, however he preferred to continue planting cabbages in his orchards.

Diocletian was born in the vicinity of Salona, ​​at the foot of the Kozjak Mountains, where flowed Salon River, now called Jadro. Salona became an important Roman city, the Colonia Martia Iulia Salona, ​​which provided a harbour, as described Strabo and where, nowadays, run the highways along the Dalmatian coast with its links to the city downtown. When the emperor returned to stay, Salona had sixty thousand souls within its walls. In the city core, where was placed the forum there are now just the remains of the basilica walls, the baths, several houses and part of the gateway framed by Caesarean wall and two octagonal towers. A little further away and bordering on the highway, but far between, they are the theatre and the amphitheatre. The walls were built during Marcus Aurelius rule, in the year 176, due to the threats of the Germanic tribes and have got about ninety defence towers. In the eastern suburb there was a bridge crossing the river Salon where five arches remain. The amphitheatre was built in the western side of the city in the mid-second century. It could accommodate ten to fifteen thousand spectators. It was badly damaged during the fights between Venetians and Turks. The first demolished a large part so it could not be used as a stronghold. Here, two houses overlook today the arena where was martyred in April 304 AD St Domnio or St Duje, Salona’s Bishop, ​​victim of Diocletian persecutions. 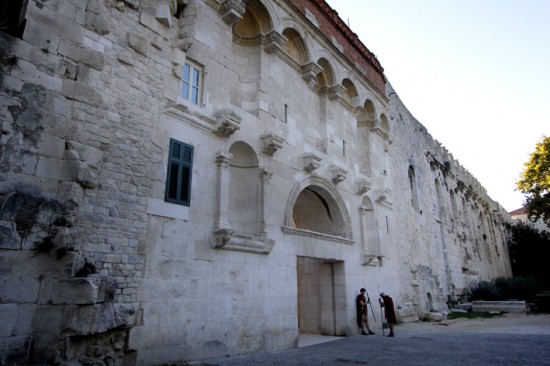 The new palace was organized with the structure of any Roman camp or town, just smaller, but not insignificant, about thirty nine thousand square meters were walled and defended by square towers at the walls and hexagonal beside the gateways. A cardo and a decumanus crossed it in longitudinal and transverse directions, between the two arcaded buildings in the north and the south there were two medium in size thermal facilities and finally an octagonal mausoleum with a semi-circular dome to house the remains of the emperor who resigned.

All doors except the one facing the sea had a Propugnaculum, a place to isolate those who entered the palace at the mercy of the guardians of the towers. North opens the Golden gate, the one leading to Salona and now seems guarded by a large statue of Grgur Nivinski, the tenth century Croatian bishop. At the present day the gate is guarded by costumed actors and musicians who use the acoustics of the doorway. To the east, the Silver Gate was once transformed to a church, later, during World War II affected by the bombings. In front, outside the wall, every day opens a large market of fruits and vegetables. At the other end of the decumanus, which today receives two names, Poljana Kraljice Jelene and Kresimirova is the Iron Gate, which also was called Porte Franche. Upon there’s the clock tower and a steeple. Crossed there’s Narodni Trg, People’s Square.

The palace centre was in the peristyle decorated with Corinthian columns and two sphinxes brought from Egypt. The protiron is the large balcony where the emperor appeared. On the eastern side is his mausoleum and at the West were three additional temples only remaining the one where is the cathedral baptistery. Behind the protiron there’s a circular hall topped with a huge occulus ceiling. The hall has an exceptional acoustic and gave access to the offices and rooms of the imperial residence where now there’s just the wall façade in front the sea. However, it has retained its structure on the lower level, the palatial underground that for long years remained blinded. Currently a part of them, which joins the peristyle with the Riva walkway, is occupied by shops, the rest, is a museum also used for exhibitions and concerts. The mausoleum of the Emperor who decreed the Christians persecution became cathedral in the seventh century when St Domnius remains were transferred to. In the thirteenth century was attached the 190 feet high bell tower which would not be completed until the fifteenth century, 183 steps lead up to the lookout.

After the sacking of Salona by the Avars in the seventh century the population took refuge behind the walls of the palace. A new city grew inside the palace perimeter in which other minor palaces were built as the two belonging to Papalic family or the one owned by the trader Giovanni Battista De Gubbio. In their decoration worked the masters George of Dalmatia and the Albanian Andreja Alessi. In the premises of the ancient Diocletian palace remain about two hundred houses where currently dwell about three thousand people. 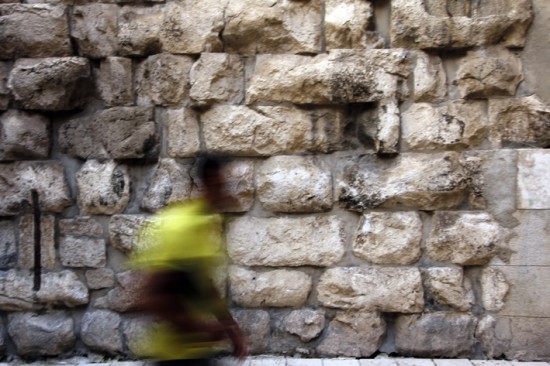 Not far from is Trg Republike, Republic Square, which recalls the days when Split was linked to another Republic, the Serenissima Republic of Venice. Their sea faced arcades remember in smaller dimensions that of the Procuraduria Palaces in San Marco square. Some Venetian families became part of the local aristocracy.

Split ceased to depend from Venice at the time when Venice ceased to depend on itself in 1797 when Napoleon Bonaparte wished, by force of arms, build the first European Union. Napoleon failure brought the Austrian occupation and this one was followed by a new Italian attempt that left the name to some neighbourhoods: Borgo Grande, Borgo Pozzobon, Borgo Luca or Botticelle. When the First World War was over and was officially called Split it joined Yugoslavia. Today is the second largest city in Croatia, after the capital Zagreb.

Split is a great starting point to explore the islands around, in the Dalmatian coast: Brac, Havr or Korcula.  Their silhouettes must be seen by Diocletian from the windows of his quarters in Spalatum. 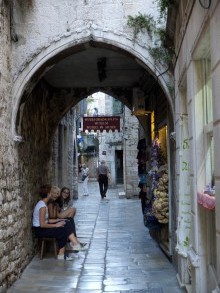 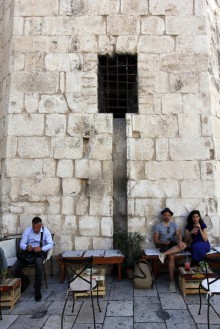