Homepage > The City of Writers

The City of Writers

Edinburgh, the Scottish capital, looks like to have attracted in some special way to a significant number of writers. Numerous authors have been born or lived in the city, to the point that there are several monuments and a museum dedicated to them.

Near Holyrood, on the slopes of the ancient crater and under the breath of Arthur's Seat presence, Peter Pan met with Lost Boys: Tootles, Nibs, Slightly, Curly and the twins. Wendy knew nothing, Pan never invited the brat, even though sometimes he should wish. Sometimes they come up by the walk ascending from Queen’s drive to quietly roll some joints rather than do it under the defiant look of hooded hoodies painted on a Cowgate’s wall. Then appeared, swift as a glimpse, Tinker Bell with her tiny orphan dragonfly wings moving, fluttering undaunted in front of his eyes. She wanted to join the party. If things go out of control they always can met with Sick Boy, Spud Murphy and Franco Begbie to go fishing some doses or nice amphetamines, those that could be obtained only by prescription in a pharmacy. Probably could find them trainspottin near Waverley station.

By the morning Edward Waverley, who was not the train station, could find Ivanhoe, Rob Roy, even without rushing too much with Sherlock Holmes or Frankenstein wandering aimlessly through the lawn of Old Calton Cemetery, until he’d decided to direct his steps to get a monstrous Caledonian pints in Tollbooth Tavern with Ralph Rover and Jack Martin, with the Master of Ballantrae, Dr. Jekyll without Mr. Hyde while Harry Potter himself will be denied entry. Without being an adverse psychedelic trip outcome, all these characters have a common, the one shared at some point in their lives their creators: Edinburgh. Probably few cities in the world have come to focus such number of visits or have attached people that get their ideas on paper shaping them. Something must attract them, perhaps the fresh ink smell, perhaps the spectacular tasty ales or the spirits of the country.

Starting in the train station, entrance to the city and named after the Walter Scott ‘s series of novels: Waverly. Squalid side roads that are the preamble of the largest, dirtiest and gloomiest station in Britain- Waverly. That was the feeling get by Neil McCallum on A Scream in the Sky in 1964. That same got Daniel Defoe few centuries earlier when he arrived in 1706, almost as a spy, to monitor the Scottish disposition to sign the Act of Union between England and Scotland. The London-based writer also featured his impression about the omnipresent dirt in the Scottish capital at that time, when he published years later, in 1727, A Tour Through the Whole Island of Great Britain.

The Scottish capital seemed to exert some sort of magnetism in the more or less coherent sentences creators, as if the city had a peculiar literary pedigree. Perhaps that was the reason why the American writer Washington Irving was not surprised when on a visit to meet Walter Scott he said: I don’t wonder than anyone residing in Edinburgh should write poetically. At least five hundred novels have used the city as background and many writers were born in it. Moreover those who chose it as temporary or permanent dwelling. More than once the city, in grateful recognition, has erected a memory in stone as a plaque or a sculpture. Even a small museum: The Writers' Museum. Set in a, not too big, three floors seventeenth century building in Wardrop's Court, once belonged to Lady Elizabeth Dowager Countess of Stair. Opposite, on Makar's Court floor, seventeen tiles contains texts fragments from as many creators in the country. The museum contains a collection of personal objects, photographs and texts of three of the country's most prominent writers: Robert Burns, Walter Scott and Robert Louis Stevenson. In the alley entrance a plaque commemorates that, in November 1786, Burns also stayed here. 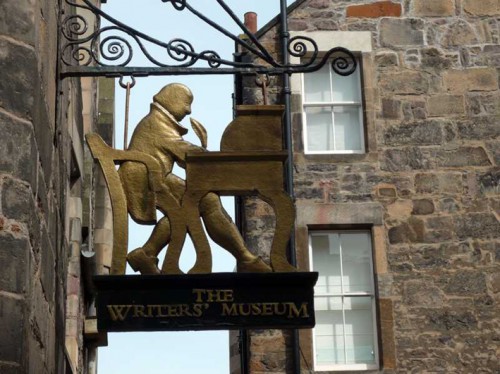 At that time Robert Burns had already published Poems chiefly in the Scottish dialect. So, preceded by his fame, the poet was welcomed by the Lord Provost, Sir James Hunter Blair. Scotland needed literary figures to match its southern neighbour: England. Since the time of the makars, medieval bards, had not emerged category firms as young Robert Fergusson, Robert Burns and soon after Sir Walter Scott.

Robert Ferguson is not in the museum, but had a significant influence on the subsequent work of Burns and opened a path for written literature in Scotland. During his short life, died at the early age of 24 in his native Edinburgh, Fergusson recreated in his poetry the life of the city as it was in the mid-eighteenth century. He published his first poems in the Weekly Magazine and Edinburgh Amusemen. He was buried in Canongate Kirk, in an unmarked grave. Some years later it would be the same Robert Burns who would pay for a tombstone with an epitaph to remind the young poet. In 2004, on the sidewalk outside the church it has been installed a bronze statue representing him, but looks like been tired of staying in his grave and march away with their books in hand.

Before moving to the Museum where he is remembered today, Robert Burns went through the White Hart Inn, in Grassmarket, where he paid his last visit to the city. Here also William Wordsworth stay when later came to visit Scott.

Robert Burns and Walter Scott were almost contemporaries. A young Scott, at fifteen, was presented to Burns. The event was immortalized in a painting by C.H. Harde brush. Scott recalled that encounter: I have seen the most distinguished men in my time ( ) Long life to thy fame and peace to thy soul Rob Burns! When I want to express a sentiment which I feel strongly, I find the phrase in Shakespeare or thee.

Walter Scott, Sir Walter Scott, is the maximum Scottish letters icon. Born in the capital spent part of his youth in the lands of the border, where he would take inspiration from folk ballads and epic stories of the struggles against the English. That will produce the Waverly stories cycle with titles such as Rob Roy or The Pirate. From his years in his hometown and there inspired he wrote the Tales of a Grandfather, recounting the assault on the Castle, and The Heart of Midlothian, from his desk at 39 North Castle Street, where he lived for many years. After his death in 1832, Scott was literally raised on a pedestal. Together with Princess Street and close to the train station which took the name of one of his most recognized characters, Waverly, was built in 1844 a 200 feet high colossal Gothic tower which dome houses a marble sculpture of the writer. It is accessible after climbing 287 spiral steps. Covering part of the walls of the monument, eighty-four characters represent characters created by his pen.

Robert Louis Stevenson is the third writer whom the Museum pays attention. Among others there’s a riding boots and photographs of his childhood and youth and the end of his life in Apia, Samoa, where they were called Tusitala, the one who tell stories. The Strange Case of Doctor Jekyll and Mister Hyde, despite being set in London, is inspired by the Scottish capital and particularly in William Brodie, better known as Deacon Brodie, a character who led a turbulent double life. He was put to death near the Cathedral of Saint Gilles. Today a pub is named after him in Lawnmarket. The front and back of the sign above the door shows the both sides of the character. About the city itself, Stevenson's compared with Venice in 1879 Edinburgh: Picturesque Notes. No urbanistically of course, but for the feeling that inspires: Her attraction is romantic in the narrowest meaning of the term. () She is not so much beautiful as interesting () with some greek airs, and erected classic temples on her crags. In a word, and above all, she is a curiosity.

Stevenson met with James Matthew Barrie and Arthur Conan Doyle in their University years. Stevenson admired the work of Barrie. This would primarily known for the creation of quasi-eternal adolescent boy who lived in Neverland: Peter Pan.

Barrie collaborated with Conan Doyle in 1893 in a comic opera that did not quite work: Jane Annie. Arthur Conan Doyle rose to fame with Sherlock Holmes, who in some of his many adventures walks through the streets of the city. Doyle was born in Picardy Place in a building already demolished in the sixties of the last century to make room for a plaza. Today in its centre stands a statue depicting the famous investigator. After the First World War, in which he participated as a private, Doyle became interested in spiritualism. In 1926 he published a book on the subject, and four years later he died in Crowborough.

Stevenson, before moving to the South Pacific, used to go to lean on the North Bridge railing, from where he have a good view of the city skyline, with the castle in the background and the station below. From this point Samuel Rutherford Crockett wrote: Sunk in a pale, luminous, silver mist through which burnt a thousand lights, warm, yellow and kindly.

Thomas de Quincey, adorable author of Confessions of an English Opium-Eater and On Murder Considered as one of the Fine Arts, came to live for a dozen years in Edinburgh. He published La Monja Alferez in Tait's Edinburgh Magazine. From time to time, De Quincey, fled to Glasgow to hide from his creditors.

Charles Dickens came from London on several occasions between 1840 and 1850, to the Assembly Rooms to recite readings of his works. At his Edimburg public he told they had been the first to recognize and encourage him.

The wife of the poet Percey Bysshe Shelley, Mary Shelley, Mary Wollstonecraft Godwin maiden, drafted in the city his famous novel Frankenstein, or The Modern Prometheus.

Robert Michael Ballantyne, contemporary, although older than Stevenson, was dedicated to the stories of adventures they had to succeed among adolescent readers. Ballantyne wrote among other stories The Coral Island, in 1857.

Irvine Welsh has most recently portrayed the marginal Edinburgh in several of his works. Trainspotting, the most important, was filmed in 1996. Joanne K. Rowling was an unknown teacher until 1995 when he wrote his first book: Harry Potter and the Philosopher's Stone. Since then the series was boundless and each delivery of the adventures of the sorcerer's apprentice had his reply on the movies. Upon success, the writer moved to Hazelbank Terrace, in Merchiston neighbourhood.

The letter’s aura city exudes reached some of their most famous public bars. Milne's Bar, on the corner of Hanover with pedestrian Rose street, is one of the quintessential literary clubs. In addition to ad hoc decoration, some of the poets and writers frequented the city during the last two centuries. In another corner, that of York Place near Broughton is The Conan Doyle. And do not miss, in Canongate, a Rabbie Burns Cafe Bar.

The last place related with letters in Edinburgh could not be other than a cemetery. The Greyfriars hosts some publishers, booksellers and librarians who were known in the city. Right here lived and died a dog, a Skye terrier, Greyfriars Bobby. Loyal to the end, wandered during its two last years of existence between the pub frequented in life by its owner until his last residence under a slab in Greyfriars Cemetery. The dog did not write a line, but also has a statue and a bar with its name.