Homepage > The Gates of Hell

The Gates of Hell

In early twentieth century the controversial Irish author George Bernard Shaw spent a few days around Tikitere, near Rotorua and the namesake lake. Like his character Pygmalion, transforming Eliza Doolittle, Shaw transformed the place renaming it. After his visit Tikitere became Hell's Gate. Although an atheist, this was the impression that the writer took from the place. 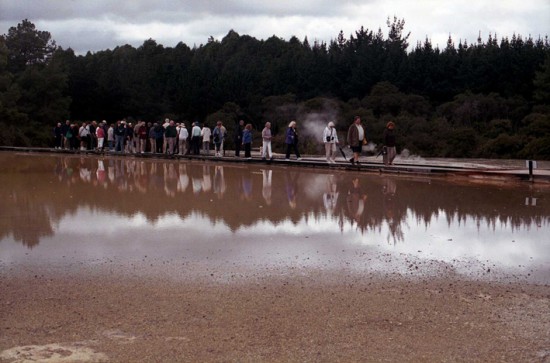 In the middle of New Zealand Northern Island, more or less, Bay of Plenty region is one of the country's most sensitive areas about volcanic activity and consequently also geothermal phenomenon as geysers, steaming fumaroles, boiling mud pools and sulphurous waters springs. Between the bay and the Taupo region, all these phenomena are concentrated around Lake Rotorua. Ten thousand years ago another large lake ninety feet depth occupied the area. Emptied into the sea, left the two lakes today existing and allowed the thermal activity.

Hell's Gate park is run by the tribe who has inhabited the region since ancient times: Ngati Rangiteaorere. The name Tikitere was originated from a Maori legend about a young princess named Hurutini who plunged into a boiling pool to avoid a family fight. Her mother found near one of the boiling pools a Korowai, a tunic of hers. Correctly believing that she had perished, the mother began to mourn exclaiming: Ane e tere nie taku tiki, here lies my precious daughter. The two main words Tiki are a Hei Tiki abbreviation, meaning something precious hanged around the neck, and Tere, means to disappear. The combination formed Tikitere, which gave rise to the name of the place. The pool where she drowned retains her name: Hurutini. Te Unauhu, a Maori high priest, who lived in the eighteenth century, used with a group of acolytes, to bathe daily in these pools: Devil's Bath and Hurutini. He believed his divination powers improved with treatment in the Tikitere warm waters. Although 95 Celsius degrees in Devil's Bath suggests just to foresee finishing eventually boiled, or at least, poached. 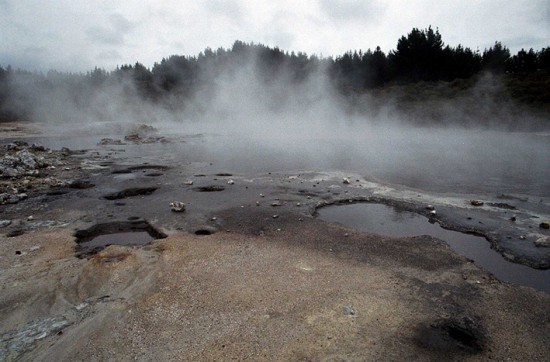 Formerly, Maori people came here to collect water with sulphur, which employed in preparing medicinal ointments. Hell's Gate has the highest hot water waterfall in the southern hemisphere, named Karaki, where it descends from its highest level at 38 Celsius degrees.

South of the gates of the hell and from Rotorua lake there are another great geothermal area: it’s Wai-O-Tapu, which in Maori means Holy Water and spread all over a zone of ​​eighteen square kilometres. Perhaps the most spectacular place is the vast, multicoloured central pool which can be crossed by a footbridge. Not surprisingly one side is called Artist's Palette. The Champagne Pool, with its one hundred eighty feet in diameter and depth is the largest in the complex. Water contains traces of gold, silver, antimony, sulphur, arsenic, mercury and thallium that accumulate on the shore creating a striking reddish limestone formation. Champagne bubbles are actually carbon dioxide and reach 74 Celsius degrees on surface as vapour rise above the liquid. Graphite and oil together form Devil's Ink Pots. Opal pools empty into a long sulphurous slope called Bridal Veil Falls, which background is dyed in yellow provided by sulphur. Other phenomena have also suggestive names as the Sulphur Cave or Oyster pool from which is seen Ngakoro lake formed one millennium ago by an eruption. 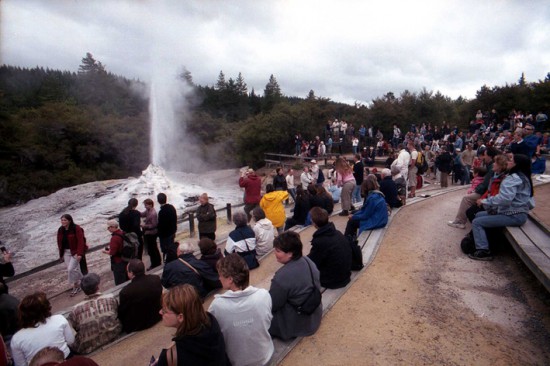 Near Wai-O-Tapu is Lady Knox Geyser point. Every day at ten and fifteen minutes it launches a monumental water jet rising up to thirty to sixty feet high.

With so many names referring to Satan: the house, the cave, the inkwell, etc ... it is not surprising that Shaw felt in the waiting room of the abode of evil. Just wonders, in his cunning, he didn’t wish to model him a  My Fair Lady. The only reason is he wrote it a dozen years later, after his visit to New Zealand. 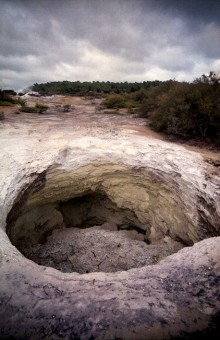 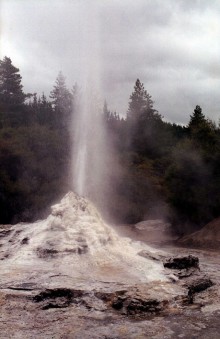