It’s a state within a state occupying only a little bit of a city, just half one square kilometre. The Vatican is like a Heaven’s Kingdom embassy on Earth. No other religion aspires to such earthly legation.

A state with such dimensions must necessarily generate some curious facts. It is the only country whose official language is a dead one: Latin, but, for practical reasons and proximity Italian is co-official. Some six hundred people enjoy nationality, between two and three hundred are residents and about four thousand five hundred employees go in and out daily. Swiss Guard does not count, they got Swiss passport. The uniqueness of the Vatican nationality is that may not be acquired by birth, no one gives birth in the Holy See, but it’s acquired by grant and is maintained throughout the period of residence within its walls. Despite this limited population has its own media, obviously trying to influence beyond its borders. Vatican Radio is led by the Society of Jesus, the Vatican Television Centre, and printed newspaper L' Osservatore Romano.

Their finances come from worldwide Catholics contributions and the financial efforts of the Institute for Works of Religion, its bank. Its currency, the euro, is minted in the neighbouring state and, like stamps, is ostensibly aimed at the collectors market. An alternative income source is tourism, in the form of souvenirs, books and visits to the Vatican Museums.

The signing of the Lateran Pact in 1929 marked the configuration of nowadays Vatican, its bounds and its relationship with Italy and the world. Until then, in their beginnings the Papal States had fought after the fall of the Roman Empire the Lombard to the north and Normans in the south. Then should thrive among the intrigues of Italian shifting kingdoms and maritime republics and later had his nemesis in the Ottoman Empire. In 1870 was incorporated into the newly created Kingdom of Italy. 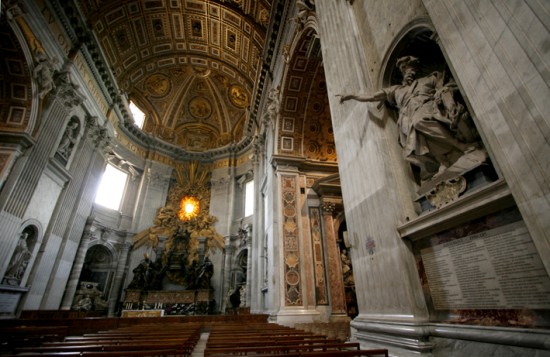 The front door of this divine embassy is Piazza di San Pietro. It occupies no less than a fifth of the Vatican territory and opens like a great prelude to the basilica. It is work of the Neapolitan architect Gian Lorenzo Bernini, ended in 1667. From Via della Conciliazione two hundred eighty-four columns close the space quietly watched by hundred forty statues of saints. In the centre rises the Egyptian obelisk that one day chaired the Circus of Nero, where it is assumed St. Peter was crucified. It’s the silent witness.

St. Peter’s Basilica is the world’s largest Christian church. Inside covers an area of ​​nearly four acres. The first Christian basilica was built on the space where there had been previously a circus, by decision of the first Christian emperor, Constantine the Great, who wanted to build a temple over the tomb of the Apostle and first Pope of the Church. It is assumed that this was the circus where the apostle was martyred and where he died crucified upside down. Indeed, this discovery would not occur until the papacy of Pius XII, in 1939, when excavations were conducted in the crypt of the basilica discovering a necropolis. On December 23, 1950 the Pope issued the announcement of the identification of the tomb, a fact confirmed in 1968 by Pope Paul VI. The basilica as is currently located was completed in 1626 and collaborated in the works Donato D’Angelo Bramante, Michelangelo, Carlo Maderno and Bernini. The dome is the highest one in the world overpassing 440 feet high and is visible from the entire city of Rome. Its perimeter is only slightly exceeded by the Pantheon of Agripa and Florence Duomo. Inside was written in six feet high letters: TV ES PETRVS ET SVPER HANC PETRAM AEDIFICABO ECCLESIAM MEAM ET TIBI DABO CLAVES REGNI CAELORVM (You are Peter, and upon this rock I will build my church. To you I give the keys of the kingdom of heaven). Balconies are decorated with reliefs depicting older relics: the tip of Longinus spear that pierced Christ’s chest or the Veil of Veronica. Above, an inclined internal staircase leads to the viewpoint that crowns the dome. If it’s seen from all Rome, all Rome it’s seen from here, including Vatican Museums' roofs. 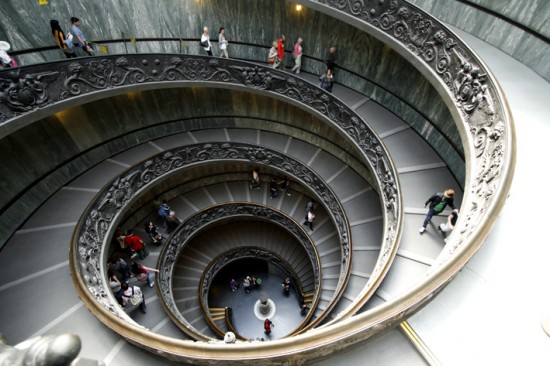 Extensive art collections gathered by the church are exhibited in the museums, in a picture gallery and in one of the largest libraries in the world which also allow access to the famous Sistine Chapel where conclaves are held for the Popes election and is decorated by Michelangelo with the very famous Creation of Adam scene and the not much less so frescoes of the Last Judgment. Once touched heaven, the museum’s exit is found after descending a spectacular and wide spiral staircase, giving back again the feet on the ground. 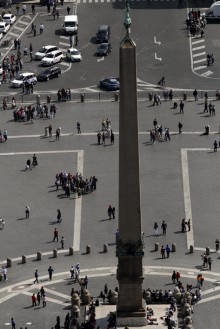 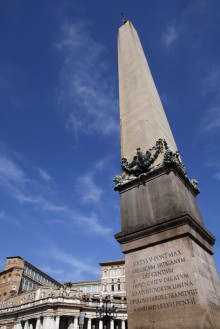