Homepage > The Island of God Bes

The Island of God Bes

Ybshm or Iboshim was the name given by the Phoenicians to Ibiza. It means the Island of God Bes, a dwarf and paunchy god that was imported from the East, from the Egyptian pantheon. Bes was a benevolent and protective god associated with good luck, which seem to adore the new idol worshipers who, in season, cram discos and nightclubs, the current temples of Ibiza. 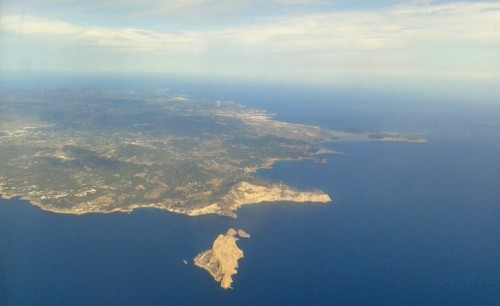 Those that the Greeks called phoeniké, the purple men, because the dyes used in their robes and they traded, and who had their bases on the land of Canaan, Berytus - Beirut - Byblos, Sidon and Tyre, had founded numerous colonies in the Western Mediterranean, some as important as Carthage and Gadir, beyond the Pillars of Hercules and probably already by mid-seventh century BC, had established a base in the largest of the Pityusic islands, Ibiza.

Specifically, in a small cove to the west of the island that is now part of the municipality of Sant Josep de sa Talaia and that is visible from the top of the city of Ibiza from which it is less than six miles away. They settled on a peninsula of reduced dimensions which is known as sa Mola de sa Caleta, a nearby headland to the salt mines where they also devoted to the extraction of galena and built some rectangular houses oriented irregularly on the ground, leaving space for small polygonal spaces between them. Probably would not live here more than a few hundred people. Anyway, occupation was relatively brief, before it had happened half a century the settlement moved to Puig de Vila, on the top now occupied by the old town of Ibiza city, Dalt Vila. The change of location could be related to an increase in population that probably originated in the fall of Tyre in 573 BC at the hands of Persia, giving prominence, once lost the metropolis, to the western colonies. In any case the island would relate more closely with the new Mediterranean power that now was based in Carthage. The population of the new town would surpass the five or six thousand inhabitants and the city extended towards the port where circulate products arriving from Egypt, from the Magna Graecia, North Africa and to be exchanged with raw materials from the coastal towns of the Iberian Peninsula. Iboshim also produced an agricultural surplus inside the island and especially produced ceramic containers, amphorae and glasses necessary to load products for export. In the early third century BC also minted coin with the image of Bes and the inscription IBSM. Diodorus Siculus speaks of Ibiza in his Historical Library: "... there is an island called Pityusa receiving this designation by the large number of pine trees growing on it. It is located in the sea and far from the Pillars of Heracles, a journey of three days and as many nights, Libya one day and one night, from Iberia one day... They say that their products include wool for its softness. It has fields and hills and a city called Ebusus, Carthaginian colony. Also have important ports and substantial walls and a large number of well-built houses ".

If the city extended to the port, to the other side of the hill was the necropolis of Puig des Molins, currently surrounded by the modern city. Taking advantage of the decline of the slope thousands of hypogeum were built with a hall and an underground chamber. There are still visible about 350 or 400 although it is estimated that were built between four and five thousand. It is precisely here where many objects from the grave goods that were not looted were found: clay figures representing the deceased or a deity, amulets and offerings. Among them the most outstanding piece is called Lady of Ibiza, a statuette of clay that does not reach two feet high. It depicts a woman richly dressed and bejewelled likely corresponding to Tanit. Made in the third century BC has a hole in her back which should serve, as in many cases, to deposit funeral ashes or perhaps relics or offerings. This is exhibited in the National Archaeological Museum in Madrid while the bulk of the findings are exhibited in the museum monographic of the site.

In addition to Bes the religious pantheon brought by the Phoenicians included Melkart, Heracles for the Greeks, a protective divinity for commercial activities which had an important shrine in Gadir and whose name means king of the city; Baal Hammon was associated with war, rain and fertility, as his consort Tanit, the great mother goddess, ruler of the earth and moon, who also looked after the transition to the afterlife. She was linked to Astarte or Ishtar, as it was known in the East.

In front of Iboshim, where today stands sa Illa Plana, - the flat island - full of new buildings and already lost their status as island in the middle of the bay, there was a sanctuary dedicated to the cult of Tanit where numerous terracotta figures were found in a well, simple and grotesques, deposited by the faithful as offerings and discovered after the first excavations in 1907.

At the other end of the island, near Sant Vicenç cove, there’s a natural cavity that was used to create a shrine dedicated initially to Melkart and later to goddess Tanit. It’s Can Culleram, which was used as such between IV and II BC centuries when surely a part of the cavity collapsed. Here, once initiated the excavations, were found more than two thousands of votive terracotta figures, most feminine, including some six hundred still whole and with traces of polychrome, and also fragments of pottery and figurines made of ivory and bronze. There are some bell-shaped in which the goddess is coated with a layer of feathers and holding the moon and a caduceus, a stick of olive tree adorned with garlands. In 1917 was found a plaque with an inscription which attributes the dedication of the shrine to Melkart by S'dr, son of Ya'as ay, son of Brgd, son of Eshmunhilles, currently preserved in the Provincial Archaeological Museum of Alicante.

Other findings occurred at the tip of Joan Tur Esquerrer, on the southern side of the city of Ibiza, in illa Grossa, beside s'Illa Plana, in the Talaia de Jesus, Puig de ses Torretes and the islet of s 'Espalmador, close to Formentera. Much of any kind of material found can be seen in the archaeological museums of Ibiza, Barcelona, ​​Valencia, Alicante and Madrid.

Along Punic Wars, Iboshim logically supported Carthage. Throughout the Second suffered the unsuccessful siege of the Roman legions. That failure was paid with the looting of the rest of the island. Livy recounted it in the Book XII of Ab Urbe Condita: "For two days and tenaciously they tried by all means to capture the city but did not. And when they saw the futility of this action were dedicated to devastate the territory of the island". The defeat of Carthage took Iboshim to the sphere of Roman influence until finally, as a federated city, becomes Ebusus.