Homepage > The Island of Madeira

The Island of Madeira

Madeira is an extremely mountainous island with peaks almost reaching 6,500 feet above sea level and then dropping sharply over valleys, gorges and cliffs, to the point that one could say the airport is literally upon the sea waves because there’s no place anywhere else to be build. That’s no fully true but is neither a lie.

If there’s something absolutely characteristic of Madeira, even more than wine, are the levadas, it means to bring in Portuguese. These are the canals and pipes that distribute water throughout the island, in fact, generally, move it from the wetter tops that stop the clouds in the island heights, to the drier south, drier but sunnier. Levadas are followed by parallel pathways designed to keep them maintained and nowadays have become attractive hiking trails, in some extreme cases flying along sheer cliffs or crossing tunnels shortcutting the way and allowing the transfer of water. There are about one thousand two hundred miles of levadas built around the island heading in almost any direction.

Whatever direction they take, roads starting from the main island’s city, Funchal, are often tortuous. To the east, the old East captaincy, following the highway to the airport there is a replica of Rio de Janeiro’s Corcovado. Actually that of Gurajao predates as it was built four years earlier. Before arriving to the airport stands Santa Cruz, one of the oldest towns on island. Today a long promenade follows the pebbles beach and runs through its small harbour. From there are clearly seen the manoeuvres that approaching airplanes must to do to land in so short distance. Santa Cruz has a pretty nice downtown. It’s small with a couple of quiet squares and a few historic buildings in the pleasant centre. A 1533 built Manueline church and a whitewashed city hall.

Left behind the aerodrome Machico is the second main city in the island. It was the Portuguese arrival shore after the discovery of Porto Santo, and here they set the headquarters of the East captaincy, one of three that divide administratively the archipelago. Machico is at the bottom of a ravine that come down from the mountains. At the end, with a nice walk covered by plane trees shade, still stands Forte Nossa Senhora do Amparo, which sheltered the population against pirate plundering.

Eastwards, Caniçal was once a whaling port that now keeps those memories in a museum. Going towards the end of the island is Prainha, the only natural sand beach and, just beyond, are Punta da São Lourenço and a path leading to Baía de Abra. Directly opposite is the Ilhéu Agostinho and after, the smaller Farol islet, even smaller, beaten by the Atlantic wind and waves.

The northeast coast is dotted with charming towns such as Porto da Cruz, where is still working one of two remaining sugar mills on the island. It’s managed by the Companhia dos Engenhos do Norte which produces molasses to distil spirits. There can be bought and tasted drinks as the famous Poncha, a combination of rum, honey and lemon or any other fruit juice. They say it health colds. 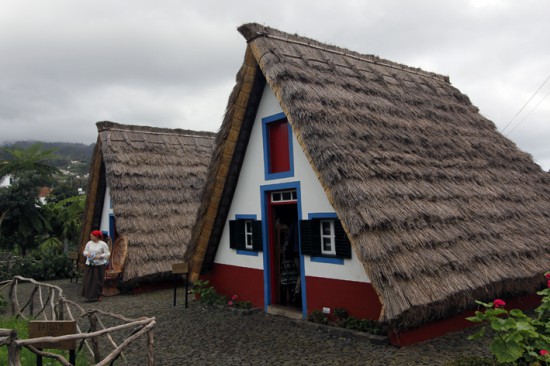 In Santana are famous the palheiros, triangular shaped cabin houses, covered with dry thatched gabled. They were simple dwellings to shelter from inclement weather. Over time they have become more sophisticated inside and have coloured facades outdoors.

In the centre, in the Natural Park – two thirds of the island are protected - there are lookouts with stunning views over the country. Eira do Serrado viewpoint provides a nice one on Curral das Freiras, a town sandwiched in a valley once almost inaccessible where, in pirate time’s raids, the religious, the Freiras, come to take refuge. Areeiro Peak, at 6,500 feet high, is accessible by car almost to the top where a café shop waits just some steps before. The top is often wrapped in thick smog that reminds Madeira Wuthering Heights. And just left Ribeiro Frio village a detour running parallel a levada leads to Miradouro do Balcões almost hanging in the void. There are handrails that have been recently renovated.

The western half of the island has its two sides; the wet northern where on the coast is the picturesque São Vicente town, with its cobbled streets and flower-laden white facades. The road that formerly ran along the coast was made on impossible cliffs, now the journey has been simplified with tunnels, is faster and safer but no longer so spectacular as it was before. But still remain some corners where to lean in Seixal and Ribeira da Janela. From Porto Moniz to Ponta do Fargo the road hides from the sea. In Ponta do Fargo the westernmost lighthouse illuminates since 1896 on a cliff one thousand feet above the sea.

Here is already felt the south, vineyards protected by fences of ferns and heather draw the landscape of the southern slopes. Names like Ponta do Sol suggest generous sunstroke. Here came in July 1960, spurred by his colleague Ernest Hemingway, the American writer John Dos Passos to visit the home of his grandparents. Today it has become a cultural centre dedicated to his memory.

On the way back to Funchal there are places where a stop is mandatory. The first is Girão Cape lookout, a dizzying 1,600 feet cliff falling steeply to the sea. At the bottom, under the feet and through the glass floor, plots are cultivated beside the waves. A smooth descent on asphalt takes a few minutes to Camara do Lobos, a small fishing harbour with colourful boats stranded on a stretch of beach. Without having to go out to the sea angling is a widespread hobby practiced in the port. Camara de Lobos was named so after the abundance of seals, lobos marinhos, which lived here in the past. Here came to paint these fishing scenes Sir Winston Churchill in 1950 when he spent a few days at Reid's Hotel in Funchal. A restaurant now bears his name with large blue letters. Concealed among the houses that hang over the harbour there is a small chapel dedicated to St Nicholas in 1732, who, here, is the sailors patron.

In Funchal awaits again a sticky company, the limpets graelhadas with butter and garlic. Outstanding.