The woman enters sparingly in the old temple, bows her head respectfully in front of Bodhisattva’s statue, she leaves some flowers and sets a thin smouldering incense sticks that immediately release a deep sandalwood fragrance. Others faithful remain and slowly and ceremoniously repeated the same gestures. Probably these have not changed over the past two millennia. What is changed is the temple itself, just a ruin in an old city deserted hundreds of years ago. Here the cult is still preserved in the temples besides excavations and restoration.

Anuradhapura would be an appropriate setting for Lara Croft adventures, and is likely to have been inspired by this city spaces to host Tomb Raider pixel heroine cyber adventures. The magnificent lakes and irrigation systems provide even today fresh water to thousands of residents who live there and to farm fields around the ancient Sinhalese capital. 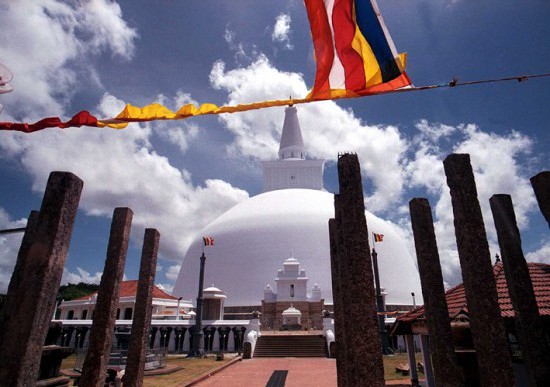 Anuradhapura would be an appropriate setting for Lara Croft adventures, and is likely to have been inspired by this city spaces to host Tomb Raider pixel heroine cyber adventures. The magnificent lakes and irrigation systems provide even today fresh water to thousands of residents who live there and to farm fields around the ancient Sinhalese capital.

Anuradhapura was founded four centuries BC by King Pandukabhaya who made it the capital of his kingdom. It was until the eleventh century. In the first century the city was known in the West by Greeks and Romans. Contained in Ptolemy's map with the name of Anurogrammon, in the island of Taprobane. The golden years of the great Sinhalese city were shared with Buddhism arrival during the third century BC, under the reign of the great emperor Ashoka and his son Mahinda in southern India. While, the island was ruled by King Devanampiya Tissa.

Chinese traveller Fa Hian visited the Island in the sixth century. He said: "... there are many notables and merchants. Houses are large and beautiful, and flat and regular streets. There are preaching rooms in every crossroad... and there gather to hear Doctrine the monks and devotees”. British explorer Samuel White Baker concluded in the nineteenth century that “millions of people should then be passed through the doors of a city next to which our modern London was comparatively a village”.

Invasions from southern India marked the decline of the big city and the new rulers built a new capital at a hundred kilometres southeast, Polonnaruwa. Defeated invaders in the late eleventh century, King Vijayabahu I kept there the court, where remained throughout the next two centuries. British colonial governor scholar James Emerson Tennent reproduced in his writings snapshots of the ancient Sinhalese city: “It was surrounded by walls, erected a fortress and built palaces containing four thousand homes. They built schools and libraries, stages for music and dance”. 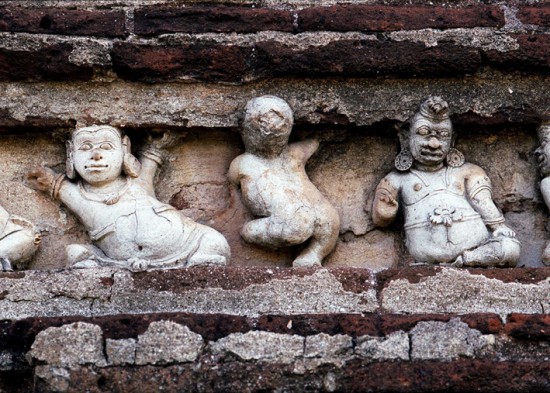 Water storage and irrigation systems exceeded those of Anuradhapura, temples and dagobas would rival those of the former capital, although they had acquired such colossal dimensions that were only comparable in size to the Egyptian pyramids.

And just as Anuradhapura did before, once thirteenth century Dravidian invasions passed by, Polonnaruwa met oblivion. In front of the ruins of the city Baker would ask: “What remains of his greatness? Has faded as a tale that is told, gone as a dream”.

After Polonnaruwa, Yapahuwa became one of the Sri Lankan ephemeral medieval capitals, with its palaces and fortress built on a huge rock ninety feet high.

Today all of them and other medieval town’s remains as Ritigala, Dambulla, Mihintale, Medigiriya are all part of the World Heritage Site of UNESCO. Both Anuradhapura and Polonnaruwa ancient temples are still worshiped while monkeys rules over old dagobas in what once was know as the Kingdom of the Lions. 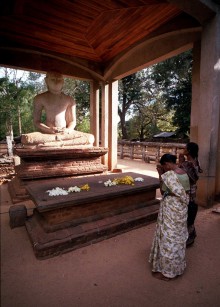 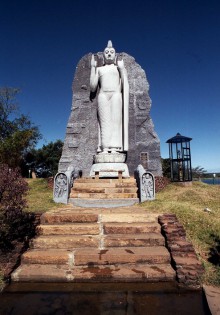