Malacca and Sunda Straits or simply the Straits, separates peninsular Malaysia from the great island of Sumatra and concentrated most of the trade between India and China, between the East and the West. Even today it is a major naval artery where piracy is still present. One hundred and ten incidents were reported in 2004. The British Empire tried to control its waters through three major ports: Penang, Malacca and Singapore.

Even in ancient times, Arab, African and Persian traders used the western shores of Malaysia as port of call to victual their ships before continuing journey to China harbours to stock exotic goods. The straits were crossed in either direction depending on the winds. And control was virtually control much of the global trade, though the world were a small orb as the days of the Kingdom of Srivijaya or the present day global village.

Malacca, a strategic point in the strait that now bears its name, was just a fishing village until the early fifteenth century, when Iskandar Shah, also known as Parameswara, an Indian prince who lived in Sumatra established there. His piracy activities forced him to flee to Temasek, Singapore today, pursued by the Mahapajit kingdom. Was routed from Temasek in 1398 by the Kingdom of Ayutthaya. The development of the port and the facilities provided to store and transport goods contributed to its growth. Arab traders called Malakat, which means concentration of traders or just market. Indian textiles were intermingled with porcelains, silk and spices of the islands, the Chinese generals visited their allies. In 1405 Admiral Zheng used the port as a base for its fleet. Parameswara's grandson, Muhammad Shah was the first Maharaja to convert to Islam. His son Muzaffar Shah took the title of sultan. A daughter of China’s Ming Emperor arrived with five hundred servants to marry Sultan Mansur Shah. The servants end up settling in the hill now called Bukit Cina. And their offspring, the Straits Chinese are known as Peranakan or nyonya. Mansur Shah lived the best days of the Malacca Sultanate that swept the Malay Peninsula, Riau Islands and the eastern coast of Sumatra. Then the Portuguese arrived.

These, like other European powers after the discovery of America, tried to find new routes to markets, until then in Europe monopolized by the Maritime Republics, mainly Venice. The Portuguese believed who ruled Malacca had put a hand on the throat of the Adriatic town. In 1511, after several unsuccessful attempts to negotiate with the Sultan to establish a trading settlement, the Viceroy of Goa, Afonso de Albuquerque, sailed from the Portuguese enclave in India with eighteen ships and one thousand four hundred men. After just a month of siege captured Malacca on August 24. The last Sultan of Malacca, Mahmud Shah, would retire to Johor, where from Penyengat, in the Riau Archipelago; his son Alauddin Riayat Shah II ruled the Sultanate remaining territories. Malacca has been in Portuguese hands for a hundred and thirty years. During that period the importance of the port declined as a result of the boycott of Chinese and Muslim merchants, who raffled Malaysian favouring other scales. Portugal used the town as a refuge for its fleets between their possessions in Indonesia, Macao and Goa.

The same year they took the city; the Portuguese fortified it with walls and bastions around the hill where the sultan's palace was, a fortress that resisted the efforts of the Sultanate of Johor to recover their port and only yielded to the Dutch attack in 1641. A Famosa Fortress was accessible through four gates: Custom House Terrace, São Domingo, Santo Antonio and Santiago. The latter is the only one still standing and has remained as one of the oldest European architectural remains preserved in Asia, through the interest of Sir Stamford Raffles who insisted, during the British rule, in the retention of any portion of the monument. The door also kept the coat of arms of the Dutch company. Outside the walls were formed Upih, Tranqueira and Tanjung Pasir neighbourhoods. In the latter, around Medan Portugis, Portugal square, still live the Kristang descendants of Portuguese settlers mixed in time with the Malays. They have their own language derived from Portuguese, the Cristao. They celebrate in June Festa Senjuang and Festa San Pedro. In its docks, when the tide is low some curious fish leave the water to have a walk on the sandy mud. Nothing compared with monitor lizards which can reach up to three meters in length, swimming in the river, downtown, or the crocodiles on the outskirts of Malacca since 1987 concentrated in Taman Buaya, the crocodile farm.

The Dutch Verenigde Oostindische Compagnie, the East India Company, had begun to settle and make a space in the Spice Islands and in the Indian Ocean and, more than once expelling competition by force. That was the case in Malacca where supported by the sultanates of Johor and Aceh seized the Portuguese port city. They ruled it between 1641 and 1798. However, the main Dutch interest was simply nobody else overshadow its most important ports in the region, mainly Batavia, present Jakarta, on the island of Java. The Dutch legacy focuses on Town square or Dutch Square, where they built, in 1650, the town hall, Stadhuys as governor's residence and now housing the Museum of History and Ethnography. Opposite are the temple of Christ Church, 1753, and the clock tower built in 1886. The church was originally whitewashed since 1911 when the whole place was painted in a distinctive red hue. St. Paul's Church, built by the Portuguese, was converted to Protestant rites and renamed Bovenkerk, the high church, as it was on the hill. Also during the Dutch era in 1645, was built the Cheng Hoon Teng temple, or temple of the Green Cloud, dedicated to Taoist, Confucian and Buddhist confessions. It’s the oldest in Malaysia. Keep an inscription dedicated to the visit of Admiral Zeng He. Nearby, in the same street Tukang Emas, is Sri Poyyatha Vinayagar the Hindu temple and Kampung Kling Mosque.

Malacca was ceded to the British after the 1824 Anglo-Dutch Treaty by which, in return, they gave in Bencoolen in Sumatra. Initially it was administered by the British East India Company before it become crown dependency and formed part of the Straits Settlements together with Penang and Singapore, for whom the British had preference. 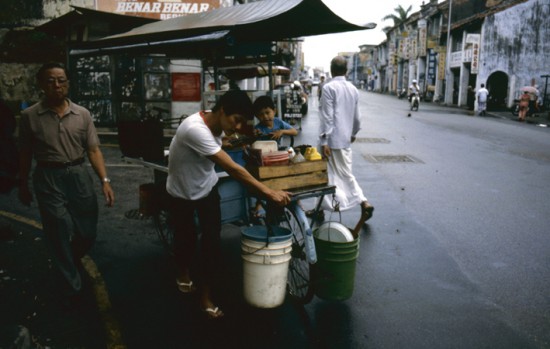 Penang Island - meaning island of the betel nuts – is just north of the strait’s mouth. Belonged to the sultanate of Kedah before the Sultan Abdullah Mukarram Shah ceded it to the British Company of the East Indies in 1786 in exchange for military protection against Burmese and Siamese army’s threat. The settlement, Captain Francis Light renamed Prince of Wales Island, was reinforced by the construction of a fort, Fort Cornwallis, where they founded Georgetown and plotted the first four streets: Beach, Light, Pitt and Chulia, which still make up the present day city core. The opening of the Suez Canal developed extraordinarily the trade with the Far East and Penang benefited from it. The boom attracted thousands of migrants from diverse provenance and the colony became a fully cosmopolitan place. Some writers wanted to learn about this Crown jewel and Somerset Maugham, Herman Hesse, Rudyard Kipling, Joseph Conrad and Karl May, among others, occupied the rooms in the Eastern and Oriental Hotel in Lebuh Farquhar.

Georgetown, despite being in Malaysia, is an authentic Chinese city, they say even more than Hong Kong or Singapore. Downtown there are still the usual Peranakan shophouses with its stores occupying the facades and there’s no rickshaw or trishaw shortage to get around.

South of the island, in Bayan Lepas, rises since 1850 the Snake Temple also called Temple of the Azure Cloud. It was built in memory of a Buddhist monk named Chor Soo Kong, who is said to have given shelter to the snakes of the jungle, so the temple is full of them slumbering with the smoke of incense and prudently devoid of their venom.

Ferries operate around the clock to unite Butterworth with the island, but since 1985 are also accessible by one of the longest bridges in Asia, Jambatan Pulau Pinang.
After the Japanese occupation during the Second World War, the Straits Settlements were dissolved in 1946 and subsequently integrated in the Malaysian Federation with the exception of Singapore, which just belong for less than one year, between 1964 and 1965. 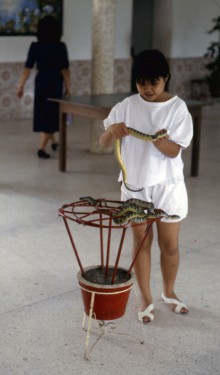 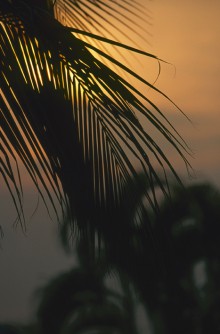