Nicolaos Mavrogenus was one of the prodigal sons of Parikia, Paros Island main town in the Greek Cyclades. Missing his native Aegean and as Wallachia governor decided benefit his hometown providing a public drinking water supply: three beautiful marble fountains. 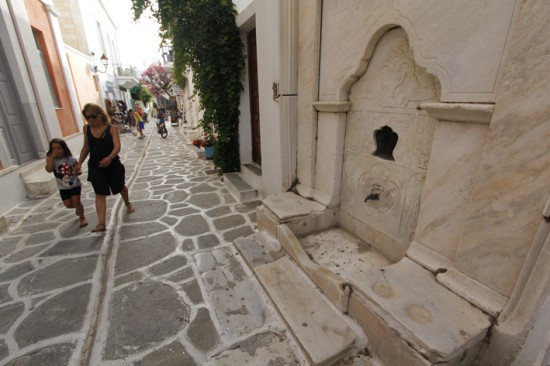 The widespread Mavrogenus family originated from the Venetian Morosini who lived in Constantinople and that in turn would Italianate the Greek name. When the city was conquered by the Turks in 1453 they began their particular diaspora. Part of the family moved to the Peloponnese, another part to the island of Euboea, near the Greek Attica, and a third branch settled on the island of Crete, then called Candia, in any case the three exile destinations were territories ruled by the Republic of Venice.

But the advance of the Turkish Empire did not stop at the ancient capital of Byzantium, in 1715 the troops of Sultan Ahmed III invaded Morea, the Greek Peloponnese that was under Venetian administration and that included the small town of Vamvakou, southeast of the peninsula. Mavrogenus family packed again their bags. Stephanos and Petros, with their parents Demetrios and Maroussaki went to the island of Paros, almost in the geographical centre of the Cyclades archipelago.

In their new exile, then in Turkey ruled territory, it appears that they improved relations with the Sublime Porte. In Parikia the Mavrogenus were a wealthy and influential family. Petrus served as Austrian and English deputy consul for the islands and funded improvements and repairs in Ekatondapiliani church in Parikia.

Nicolaos, son of Petros who already was born in Paros, become translator in Ottoman fleet under Hassan Pacha. In April 1786, he was proposed as governor for the province of Wallachia, a position he held until his death in 1790, just four years later. Nicolaos was an atypical dignitary if not extravagant, he ordered his officials to live an austere and exemplary life, that’s why he forbidden them to stay for more than one hour after sunset in the taverns. A kind of drastic last order. He assigned to his horse a position and a room in the court with the aim of humiliating some of his boyars. At the beginning of the war with Russia an astrologer foretold an easy win, so between July and October 1788 besieged the city of Kronstadt, Brasov today. Unsuccessfully. In June 1790 he was defeated at Calafat, on the Danube. He withdrew alone along the Bulgarian bank of the river until we found a representative of the Sultan. This killed him in Byala and his body was buried near the river and his head sent to Constantinople where it was exhibited on a stake. 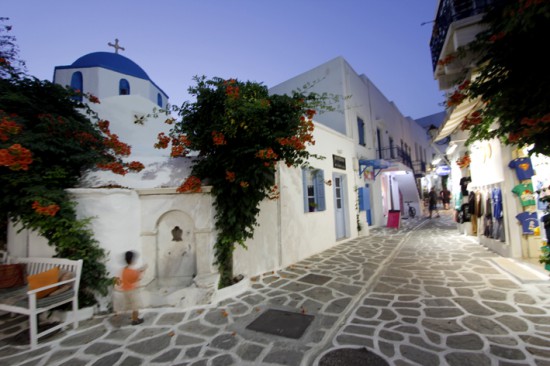 Before his bizarre final, Nicolaos had time to devote some efforts to his countrymen founding a Greek library in Constantinople. In Parikia paved the main street that was the market street and the three marble fountains, all with the inscription Νικόλαος Μαυρογένης, Nicolaos Mavrogenes engraved in 1777.

One of the fountains, perhaps the most visible, is at Odos Lochagou Kourtinou, which was the old Market Street and today it still remains but mainly filled with touristic merchandise as the various jewellery and clothing and other souvenir paraphernalia. Just in the whitewashed wall of the apse of a small Orthodox church and beside the flowery jasmine hanging on both sides is the fountain. It is a simple structure of two overlapping marble pieces in which the pipes are under an arch. In fact the pipe, the only one preserved. Above them there is a small lobed niche in the shape of an inverted tulip. Maybe it was used to keep a glass or a cup. The slab to containment of the water is very worn. At the centre the piece is lowered, maybe to allow dogs and cats drink more easily. As in the other two fountains an engraved cross decorates the top of the arch dividing the name and surname of the donor. The figure for the year is also split, 17 at the left and 77 at the right.

The second fountain is on the same street, a little further north near the corner of the stairs leading to the Venetian Kastro. To his right a trade offers anything that can be made from olive wood. This fountain is very similar to the previous but no longer has any spout and the niche is simpler, neither looks like a tulip nor it is lobed. To the right of the hollow a ring dunk probably must ensure in the past that no glass or cup could be stolen. Unsuccessfully. In fact this is the least appealing of the three fountains. 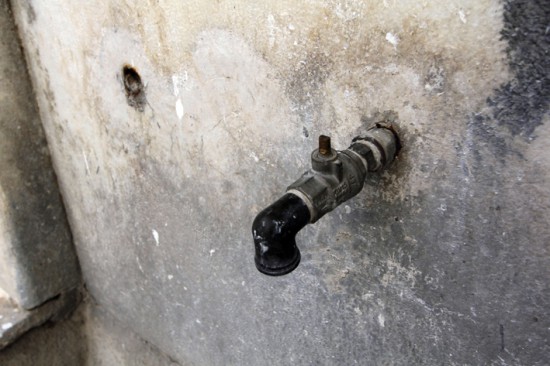 The third and last is in a prolongation to the right hand of Market Street, on the way to the port. It is the largest of the three and the one with a more complex decoration. It is topped by a triangular pediment with three marble balls. Under the niche, in inverted rose shape, stands the only pipe and lacking faucet tap, none of the three sources works today. The front is divided into seven sections decorated with floral motifs. In the upper section, two herons unison drink from the same cup. Above them hangs a shell.

There are some more fountains in Parikia. One hides in the shadows of a porch, but lack of the antiquity and charm Mavrogenus’ got. Cretan poet Odysseas Elytis must have been impressed because he mentioned in his 1959 extensive ode To Axion Esti: No matter where you step your foot, I cry, turn on, brothers, turn on a fountain, your fountain of Mavrogenis!

There are other places in the islands where you can see the Mavrogenus family name. But it used to be related to Manto Mavrogenus, daughter of another Nikolaos, nephew of the Prince of Wallachia and born in Trieste, she was a heroine of Greek independence. In Parikia there is a square with her name and the house where he lived is preserved. In Mykonos she is remembered with a marble bust near the busy harbour cafes. 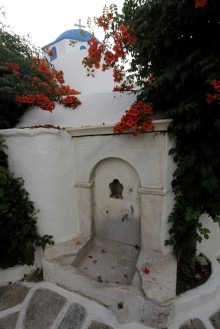 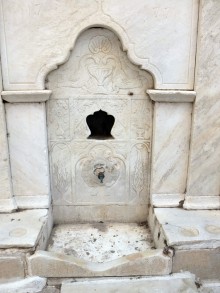