Tro Breizh means nothing else than: through Brittany. In Breton, of course. In the days when long pilgrimages started, Brittany eased to local believers with no means access to a venerable prayer and nearest relics between the cities hosting the story of the Seven Holy Founders of Brittany.

Brittany had been occupied by Celtic tribes in the time of Roman rule. Integrated into Roman culture had changed their ancient language by Latin until the fall of the Empire. The Barbarian Invasions, mainly Saxon arrived in the Britain Island, pushed migrants to the mainland. The Celtic language returned to the peninsula and to the present Normandy.

With emigrants crossed Mor Breizh, the Channel, the so called Holy Founders, probably ancient tribal chiefs from southwest Dumnonia, duly transfigured into myth in its Christianized version. In some cases like that of Saint Pol de Léon, or Aurelianus Paulus, were part of the British-Roman aristocracy. The six other saints founders were Saint Tugdual, Saint Brieuc, Saint Malo, Saint Samson of Dol, Saint Patern and Saint Corentin. Each of them got his own dioceses, which retain in time more or less the same territory until the creation of the departments during the French Revolution.

In the Middle Ages began the practice of pilgrimages. The continued confrontation with Muslims domains favoured the fervent exaltation of the Christianity founding myths. Towards Jerusalem during the long years of the Crusades to pray at the tomb of Jesus Christ. Following the path of the stars on the restored tomb of the Apostle in Santiago de Compostela. Saint Peter in the new capital of Christianity, Rome. Venice not gives up and houses the relics of another apostle, San Marcos in this case, as a discourse to justify the existence of the Republic. In Brittany the pilgrimage suggests touring the seats of the Seven Holy Founders. Tro Breizh, was launched again in 1994, by the association Les Chemins de Tro Breizh, partly as a tourist attraction and even has normalized the trail, so, if desired, walking to a seat or a saint every year. A pilgrimage in instalments.

The first stop is in Vannes, the Roman Darioritum in the department of Morbihan, where Saint Patern was called Patern l'Ancien to distinguish it from the Bishop Patern d'Avranches. He would have founded a monastery in Wales, Llanbadarn Fawr, and would have made the pilgrimage to Jerusalem where he received Episcopal consecration. Also it’s said that Caradoc, or Cardok, one of the Arthur’s round table knights was to accompany the saint up to Vannes. The relics are preserved in the church that bears his name, destroyed in the tenth century by the Normans was rebuilt later in the eighteenth century by local architect Olivier Delourme. Saint Paterne is often depicted carrying a church in his hands, one hand in relation to the fact that he founded several monasteries and to baptize many new believers, but also linked to the story in which a prince entrusted treasure in a similar box. Some time later when he claimed the holy chest and the saint returned it there was nothing but sand and stones. Patern argued that he had never opened the box. He was subjected to a divine judgment by which his arm was immersed in boiling oil. As the arm removed intact without any burn he was considered innocent. 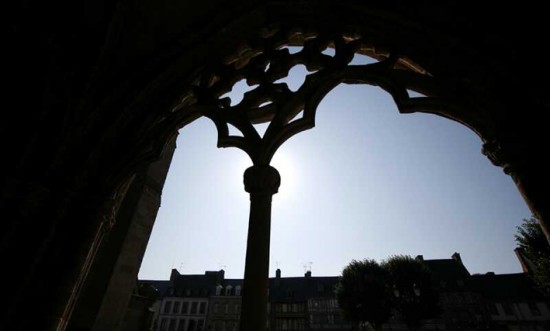 The monk Dom Plaine wrote in the thirteenth century Vita of Saint Corentin, which collects the miracles attributed to the holy founder, relates that he was a hermit in Menez-Hom, at the foot of the Black Mountains, in Finistère and there is credited the miracle of the fish that fed him tearing a piece of meat. Instead of dying, the fish was regenerated daily. Corentin fed thus also the king of Cornwall Gradlon the Great, who in gratitude asked to take care of the new diocese of Quimper. The miracle of the fish is probably a metaphor for the Eucharist and early Christian symbolism. Icthus, ΙΧΘΥΣ, fish in Greek, is an acronym for Iesous Christos Theou Yios Soter, Jesus Christ, Son of God, Saviour. The fish was the symbol of recognition among the early Christians. The saint would be buried in the Cathedral of Saint Corentin in Quimper, the highest in all of Brittany, built on an ancient Roman sanctuary.

The third Tro Breizh stop leads to the town of Saint Pol de Léon, in northern Finistère, where an arm bone relic of Saint Pol Aurelien awaits the pilgrim in the cathedral that bears his name. Originally from Wales it’s said about Saint Pol that would have preached the gospel in the court of the legendary King Mark, in Great Britain, and in the Ile de Batz, near the mainland Brittany he would have killed a dragon. Praiseworthy and widespread habitude in high Middle Ages. Saint Pol would be bishop at Castel-Paol, currently Saint Pol de Léon. After the Norman invasions his remains were moved to the monastery of Saint Florent, in Fleury-sur-Loire, where centuries later, in 1570, would be destroyed by the Huguenots. With the exception of the arm bone.

Tudgual, Tudwal, Tuzval, Tudal, Tual, or even Tudy are some variants of Saint Tugdual de Tréguier. If truly all of them were the same person. The aforementioned Dom Plaine wrote about the Trois Vies de Saint Tugdual, the three lives of the Saint, subsequently studied by historian Bernard Tanguy in Hagionomastique et histoire, Pabu Tugdual alias Tudi et les origines du diocèse de Cornouaille, beginning controversy over the hagiographies coincidence. In any case, it is assumed that the saint was born in Devon, founded a monastery in Ploumoguer before taking charge of Tréguier, founded by his uncle Saint Brieuc. Tréguier is the place where the Gothic cathedral also conserved Romanesque elements. It has a beautiful cloister with forty-eight arcades from where may be seen the three towers of the cathedral.

Beatified for having tamed wolves Saint Brieuc had been a disciple of Saint Germain d'Auxerre. Both preach together on Armorica coasts. Tréguier had founded another monastery beside Gouët river mouth. Over time the area was settled, adopting the saint’s name. Saint Brieuc is represented with three purses and a wolf at his feet. Purse account for its generosity to the needy. The Cathedral of Saint Etienne in the town of Saint Brieuc, where his relics are housed is the fifth Tro Breizh stage.

Maclou, MacLow or Maclovius in its Latin version, was born in Glemorgan in south Wales. He would be the first bishop of Aleth, in the current Saint Servan, today a neighbourhood in the city of Saint Malo. Saint Malo, the saint, would have been godson and disciple of the legendary Saint Brendan and even would have joined him on the travel in search of earthly paradise. At least that would justify the seven years it took him to cross the Channel. The diffusion of his cult in the Middle Ages responds to the dispersion of his relics due to Norman invasions. There are no sign of them in Saint Vincent cathedral in the city named after the saint, Saint-Malo, where some relics were moved to Saint-Malo church in Dinan, on April 22, 1787. A little bit messy.

The last stage of this circular pilgrimage is situated in the peaceful village of Dol de Bretagne, where in its cathedral remains the seventh holy founder, who died in the city in 565. His real existence is certified in the minutes of the Council of Paris in 560. Saint Samson came from Wales, from the monastery of Llantwit-Major. In the cathedral there is a stained glass window depicting his journey to Brittany and a sarcophagus that one day he himself occupied. 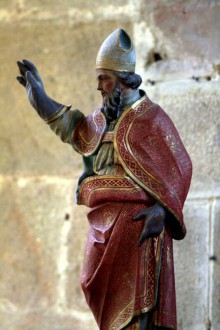 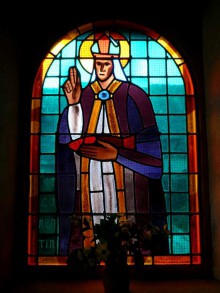