What must have been seventeenth century largest warship destined to dominate the Baltic waters along the confrontation that Sweden maintained against Poland and Latvia in the framework of the Thirty Years War, ended up being a fiasco that barely sailed a mile before sinking in front of the island of Beckholmen, Stockholm, without having even reached open sea. 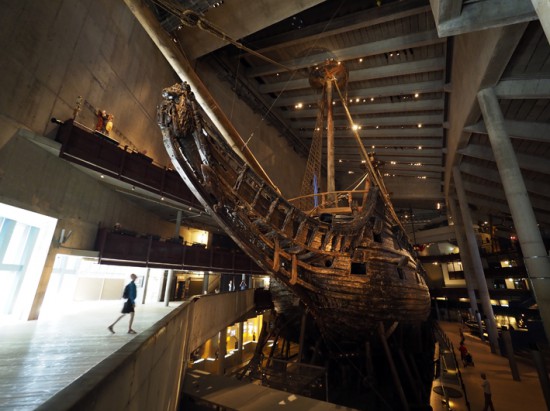 The involvement in European wars that tried to resolve the supremacy of Catholics or Protestants advised the Swedish crown, at that time embodied in King Gustavus II Adolphus, to impose naval supremacy on Baltic waters. So far, Swedish navy consisted basically of relatively small lengths ships armed with artillery that did not fire ammunition greater than twelve pounds. In the 1620s, the navy had suffered some major setbacks: ten units were shipwrecked in Riga Bay in a storm, a squadron was defeated in the Battle of Oliwa, in which they lost the fleet flagship, the Tigern and another major vessel, the Solen and shipwrecked the Kristina and the Riksnyckeln (the Key to the Kingdom). In view of this situation, the construction of four new war vessels was ordered, to ensure the superiority and prestige of the Swedish navy. The two main ones would be the Vasa and the Tre Kronen, the Three Crowns, in reference to the country’s coat of arms.

More than a thousand oaks were cut down in Sörmland forests, north of the capital, and transferred to Skeppsgården shipyards just for the construction of the Vasa which would begin in January 1626 by the Dutch naval builders Henrik Hybertsson and Arendt de Groote. On the 16th, they signed the contract to build four boats. Henrik would be replaced when he fell ill and died in 1627 by another Dutchman, Henrik Hein Jacobsson. The Vasa would displace 1.210 tons, it measured 226 feet in length with the figurehead and the bowsprit and almost 40 of sleeve, its ten sails covered a surface of ​​1.275 square meters. She had capacity for 445 men, 145 of them composed the crew and the rest were soldiers.

The Vasa was ostentatiously decorated, not in vain should become the flagship of a renewed Swedish fleet. She had about seven hundred polychrome sculptures carved in pine, oak and linden wood that were made by six sculptors with their teams of apprentices and assistants. The work took them about two years and they represented figures from the Old Testament, Egypt, newts, sea monsters, the emperors who ruled Rome from Tiberius to Septimius Severus, and, of course King Gustav II Adolphus being crowned by two faucets that flank him.

What should turn the Vasa into the most feared vessel of its time was a huge firepower, which would provide the combined shot of their artillery pieces that could reach 588 pounds of ammunition on one side, the largest a single warship was capable of launching in the Baltic and throughout northern Europe. Such power would not be achieved again until in Boston, United States, the USS Constitution was launched in 1797, 169 years later. However, the manufacture of cannons was even more expensive than that of the vessels themselves, and it was common that the artillery equipment wasn’t permanently assigned to a vessel but to be distributed among the fleet depending on the needs, in fact the artillery pieces had a longer service life than that of the vessels. When the Vasa sailed, eight pieces of the 72 planned were still to be delivered. Altogether she had 64 bronze cannons, 48 ​​of them were carrying 24-pound ammunition, 8 were firing three-pound bullets and two one-pound bullets, in addition to six short range pieces called stormstycken, designed to sweep with fire the enemy deck. 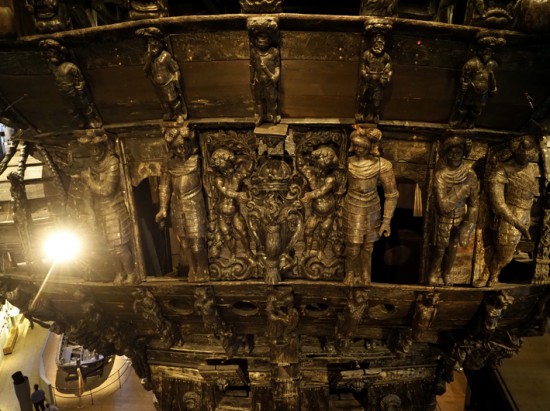 The Vasa was launched in January 1628, but the works were not yet finished, the upper bridge, the stern castle, the beakhead and the rigging were still to be completed. That month the king visited the shipyards and perhaps it was the only time he could contemplate the ship. When summer arrived, stability tests were carried out, which consisted in running thirty men simultaneously from port to starboard on the deck. After three rounds, the test was suspended after checking that it swung dangerously in excess.

The king had sent some letters urging Lord High Admiral Klaus Fleming to launch the vessel, so on Sunday, August 10, 1628, Captain Söfring Hansson ordered the Vasa to make her maiden voyage. The day was calm and there was hardly a breeze from the southwest when it sailed from the Älvsnabben docks. It was towed from the Tre Kronor castle along Skeppsbron to the end of the old city, Gamla Stan, where on reaching Slussen the ropes were released and the ship began navigating on its own. There was a certain expectation and in addition to the public, ambassadors and authorities came to contemplate the first navigation. When she passed the pier, four sails were raised, propelling her eastward. She had to show her strength, so all the gunports were open, ready to make a first greeting. As she passed over the Södelmalm coastline, a breath of air swelled the sails and gently tilted to starboard. As she reached the point of Tegelviken a new gust bent her, this time to port and with enough force to sink the lower gun deck ports below the waterline. The water poured in, completely destabilizing the ship and causing her to capsize in minutes. The ship plunged to the bottom and was stranded at a depth of 105 feet and barely three hundred feet from the coast of the small island of Beckholmen. Thirty crewmen drowned. The voyage of the Vasa hardly lasted a quarter of an hour.

On September 5, a commission was established in the Tre Kronor palace to investigate the causes of the shipwreck and debug responsibilities, composed of seventeen councillors and officers of the navy and chaired by Admiral Karl Karlsson Gyllenhielm. Each of the officers who survived the shipwreck, including Captain Söfring Hansson, declared that the entire crew was sober and that the artillery, cargo and ballast anchorages were properly fixed. The shipowners assured that they had followed the construction and assembly instructions of the ship to the letter. The aim of the investigation seemed to be more in trying to find a scapegoat than in discovering the real causes of the disaster, so, finally, the shipwreck was attributed to problems in the design of Henrik Hybertsson, who, to make things easier, had died one year earlier.

The tests mentioned above had already provided an indication of the causes of the disaster: the low stability of the ship due to a centre of gravity that was too high that not even the 120 tons of stone used as ballast could compensate and the last reason could be due to the modifications made on the structure to house the second gun deck, an express request of the monarch for the vessel to have an exceptional firepower. Even so, the Vasa would not have sunk on its first voyage if the lower artillery gunports had remained closed. 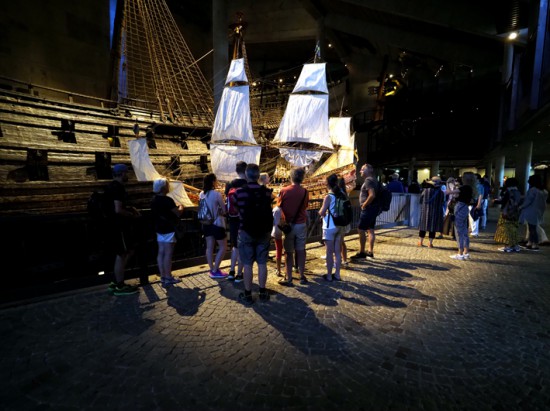 The first attempts, unsuccessful, to rescue the ship, were made only three days after the shipwreck, however, with the technology of the time the only thing that was achieved was dragging it to shallower waters. Thirty years later a team of divers retrieved more than fifty guns. But it would not be until the mid-twentieth century when the rescue of the Vasa began to be seriously considered. In 1956 the amateur archaeologist Anders Franzen together with the diver Edvin Fälting spent the summer locating the exact whereabouts of the ship, which they located on August 25. From then on, the recovery work began, involving more than 1,300 dives to drill six tunnels under the wreck through which the cables that had to hoist it were to pass. Finally, on the morning of April 24, 1961, the Vasa returned to the surface. She had spent 333 years resting on the mud of the seabed in Stockholm. The expectation that had caused the maiden voyage was repeated to witness how the hull surfaced again thanks to the two pontoons that refloated it. Accompanied by two tugboats, pontoons and galleon, they reached the dry dock of the Beckholmen shipyard.

In 1981 the Swedish government chose to build a permanent space to house and maintain the Vasa, a space about one hundred feet high that was created by the architects Göran Mänsson and Marianne Dahlbäckque in Galärvarvet shipyards, in Djurgården. The building is topped by three masts that evoke those of the boat with the same height and situation that they would have if they were the real ones. The museum would be definitely open to the general public in 1990. There are also exhibits, sculptures, anchors and objects recovered by the sailors near the wreck. 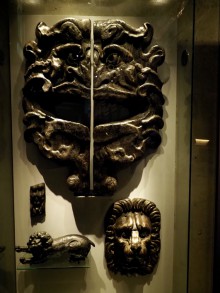 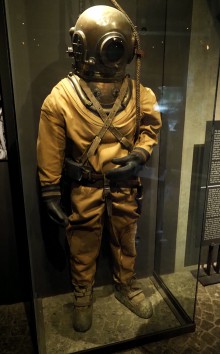