Being postman in Venice, or at least an inexperienced one, may be a kind of nightmare. Streets repeat with some regularity its names are not numbered consecutively. Corresponds, more or less, to the order in time when buildings were raised. The scheme is shared, with the same pattern in each city sestiere –district -. Not surprisingly, after have seen number 500, turn a corner and found number 2000. Or just facing a 500 is found a 700 in the opposite facade in a street that has no more than fifteen gateways. For example, the number 1918 exists in Pignater Street, in the Fondamenta de la Tana, in Bollani courtyard or in the campo San Fantin, in different sestieri. 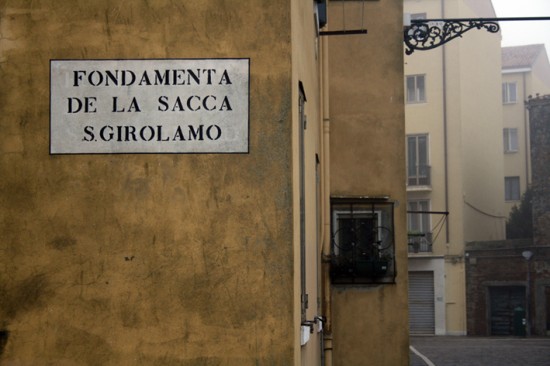 Regardless of the type of urban road, names are related to activities that took place in them (forner, pistor...), or the noble families who lived in or churches or neighbouring parishes and foreign populations that occupied them (Albanesi, Armeni, Schiavoni, Tedeschi). 31 streets named del Forno (oven) may be counted, 16 called Preti (Priest) as many as Magazen (warehouse), 15 Mezzo (middle) streets, 13 Nova (new) courtyards, 7 Storto bridges (twisted) and more Madonna, the Christ or the Frari (friar) of Remer (rower) of Tagiapera (stone carver) campos, campiellos and streets...

To help somehow to guide the neophyte in the maze, every street, field, or bridge, bears its name. The peculiarity in Venice is that these are hand painted on a white background framed in a black stroke. Are nizioleti, small sheet in Venetian dialect, which decorates every corner. Most of them indicate only the name of the place, but there are also showing the beginning or end of the term of a sestiere, parish, or pointing a direction.

Venetian toponomastic is certainly a bit complex and comes from the development of the city over time, construction of bridges and piers to changing streets and squares modified while new buildings arise. After the year 1050 the city was divided into districts corresponding to each parish names, names that are still preserved and survived the Napoleonic 1806 edict. 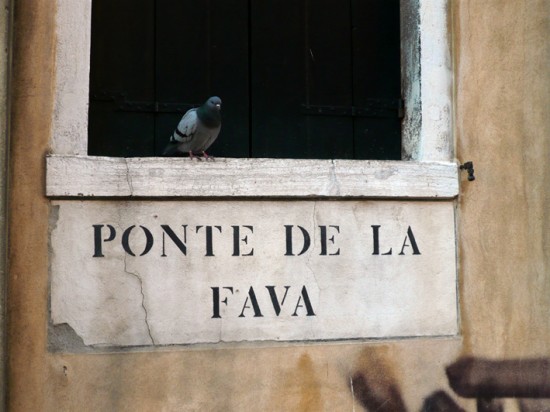 Most denominations of urban elements come from the Middle Ages. Calle  (street)  is derived from Latin Callis - sidewalk or path- rather than Italian strada, and are generally long and narrow. Fondamenta are the sidewalks running in parallel to water channels, and campo or campiello  just means square depending on the size. With the exception of Piazza, used exclusively for St. Mark square, and Piazzetta, only the square next to the Basilica. Piazzale (once again square) is  used exclusively for Piazzale Roma, the only point accessible by four-wheel vehicles. Regarding streets there are a considerable variety of specifications. There are two called Vias that could be understood as avenues, pedestrian of course:  Via Garibaldi, in the Castello popular district and the commercial Via XXII Marzo in San Marco. There is a Strada, atypical name in Venice, narrower than Vias and wider than Calles, the Strada Nova linking Santi Apostoli with Santa Fosca was opened in the nineteenth century. The Lista di Spagna, was a stretch of street near the palace of an ambassador in which diplomatic immunity was in effect. The only example is close to the train station and once dispatched there the Spanish  Catholic Monarchs embassy. Ruga and Rughetta were originated from the French rue and indicated the lined business streets. They date back when the city was still sparsely populated and the streets were rare as we conceive today. Salizada formerly distinguished a cobbled street, fact that was unusual. Rio Terá or Piscina identifies old channels or pools nowadays covered streets or squares. A Ramo is a street derivation usually leading to a channel. Riva corresponds generally to a place where boarding and disembark, load or unload, was authorized to, though this name is usually given to those that are wider as Riva de Carbon, the Riva del Vin or Riva del Ferro, near Rialto, or Schiavoni and Sette Martiri in the Bacino di San Marco. Still there are Cortes, inner courtyards, core of neighbourhood life surrounded by  a group of houses with a single entry. And sottoportego, covered passageways commonly dark and low leading to a courtyard or any other street.

Venice is a world where is not only possible get lost in its maze of streets and alleys, fields and salizadas, fondamentas and bridges, but it is also possible to get lost in the reverie that provide their names and stories and legends attributed to them. Among true stories, in Ponte dei Pugni in Dorsoduro, not far from the campo di Santa Marghereta next to San Barnabá, its name comes from the meetings held between Nicolotti, dwellers of the parish of San Nicolò dei Mendicoli and the Castellani from the Castello district, home to the ancient San Pietro cathedral. Their rivalry was resolved each year between September and Christmas on the bridge, then without handrails. Contestants were placed on each bank on a piece of Istrian stone representing a foot plant, starting point of confrontation with clubs and punches in an attempt to catch the other side the central platform. Of course many of them ended up in the canal waters, the large audience was given to bet on one or another faction... until 1705, when was banned for the deaths occurred during a particularly rough encounter when  also knives were used. Settecento landscapers Antonio Stom and Joseph Heintz the Younger captured the event in his oils. 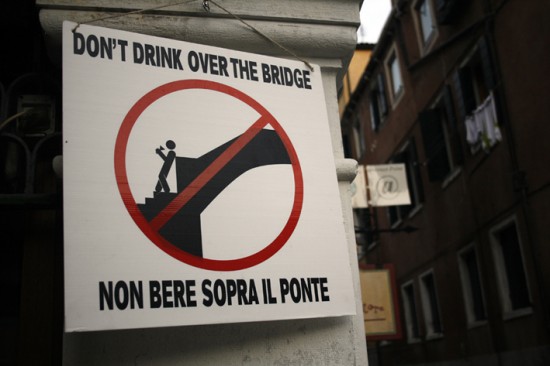 Or the fondamenta delle Carampane and Ponte delle Tette stories. In the district of San Polo was Trapani’s family home, hence the name of Carampane, ca 'rampani, there is subsequently established a community of courtesans who  advertised their business displaying their goods pocking in the windows at the end of the fondamenta just beside the bridge currently known as Ponte delle Tette precisely.

Of course no shortage of names based on stories generated by popular imagery, legends and myths ... but, how often it’s said ... that's another story. 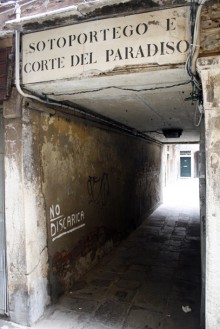 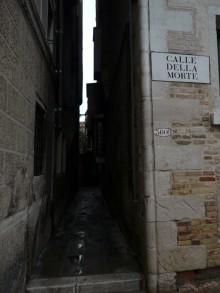