As Bob Dylan in the sixties, Caius Calpetano Rantio Quirinal Valerio Festo probably thought the times they are a-changin’ when he saw finished the new road he had inaugurated. It linked Bracara Augusta with Asturica Augusta, at the end of the Empire. Vespasian, the Emperor had ordered its construction to facilitate gold transport from the Galician mines and to reduce, significantly, the distances between the major cities of the region. Work would be finished by his sons Titus and Domitian. 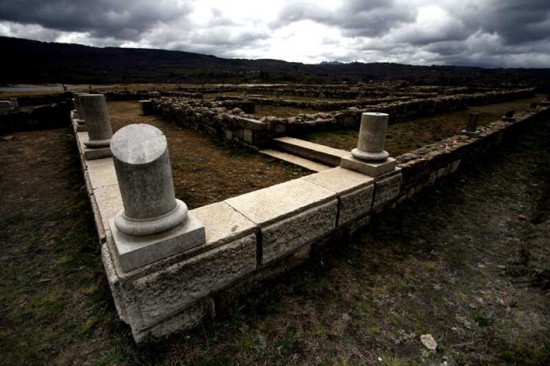 Now between both cities were no longer necessary spending entire days for the two hundred and fifteen miles that separate them. A lightweight well calibrated single axis cisium, manually fine polished wheels and pulled by two young horses, will not suffer the same punishment on the new road and would need less than three days to complete the whole distance. The trip was the shortest of the existing so far and was clearly marked every thousand steps, i.e. every Roman mile where the miliarium, the milestones, indicate the distances and give news about the architects who made the road. At reasonable day travel intervals, a mansio and tabernae allowed overnight, restore and refresh the horses.

Long ago were the dark times of stupid and superstitious credulity, when legionaries refused to cross the river Limia believing it was actually the Lethæus, which, unlike the Mnemosyne, steal recalls and left memories, unnecessary in the land of the dead. Imagery put it at this end of the Empire, west of Hispania Citerior, near the misty Finisterrae. Trickery already the Praetor Decimus Junius Brutus was commissioned to discredit when called his soldiers by name, one by one, from the other side of the river, once it had forded the river. 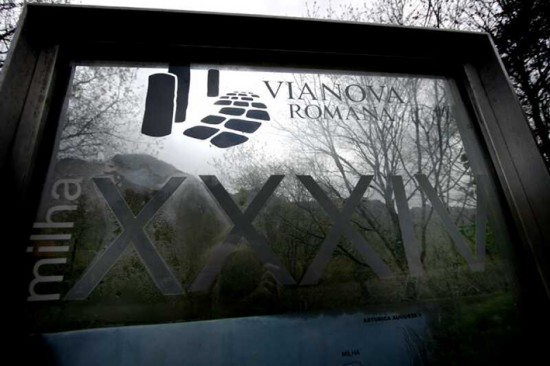 Valerio Festo ordered engrave his name on a milestone at the end of the new road XVIII, Via Nova, the New Road, for his own glory survive any accidental and inconvenient Lethæus crossing. Could be lethal. Granite, well wrought, never forgets.

Publicus Cursus network, road network established by Augustus in the turn of the millennium, that is, more or less at the dawn of our era, aimed to ease communications and goods transit in the Empire. Three hundred years later Antonino pick in his Itinerarium Antonini the 372 official state roads, as reflected in the praetor register. Via Nova is stated in Item alio itinere a Bracara Augusta chapter. The whole network came to cover a hundred and twenty thousand kilometres and countless carrucas, carpentum, carrus, cisium and plaustrum circulated pulled by horses, mules or oxen, in addition to travellers on foot, the most common means of transport.

From the city of Bracara Augusta, the new road is heading northwest. Wagons and horses trod a well levelled, compact and rigid surface seven meters wide allowing a relaxed circulation. Throughout the entire road is no more than six degrees of slope, and rain, abundant in the region would never flood the accurately banked surface and provided with drainage channels on both sides. Penetrating the Serra do Gerês, Portugal today, the route reaches mile XXI where was the first stop, the mansio Salaniana, vestiges of which may be under Terras de Bouro. In the current border post Portela do Homem, seven hundred and fifty meters above sea level, nine milestones are preserved. One indicates repairs made to the vias et pontes temporis vetustate conlapsos restituerunt. A stretch of road has been restored, down to the Spanish side of the Serra de Xurés, along the right bank of the river Caldo, but never reaches the original width. Along the road, going down the town of Lobios, an anagraphic milestones group is exposed roadside between Ponte Nova and A Pala Falsa.

The second mansio described in Antonino handbook is in the vicinity of Lobios in Baños de Riocaldo. Near the modern thermal facilities are Originis Aqvis ruins, among them are the half restored hipocaustum, the furnace heating system outside the building.

Next stop is Aqvis Qverqvennis, besides Conchas dam which sometimes floods part of the remains of the former military camp. In the heyday of the Via Nova, Aqvis Qverqvennis was almost a polis, as defined by Ptolemy. Alongside, the garrison controlled the area. At least five hundred legionaries occupied the barracks, sheltered by walls more than three meters high. It is believed that hosted the first cohort Gallaica Equitata or perhaps a third of the Legion VII Gemina. Last century excavations have uncovered the foundations of two of the four gates of the camp, the porta principalis sinistra and porta decumana, the principia or administrative area, the hospital or valetudinarium, the horrea or pantries, and several barracks sectors with its soldiers contubernia and compluvium, tanks to collect rainwater. 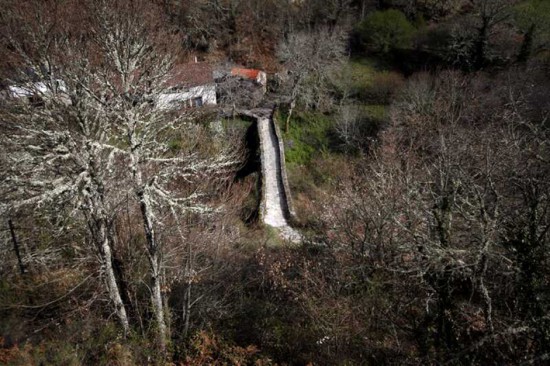 Past Aqvis Qverqvenis road forked. A branch was headed to Lucus Augusti, Lugo, crossing Miño River over Orense roman bridge. The other extended the Via Nova toward mansio of Geminas, Salientibus and Presidio until Navea River, saved by a bridge. From this point milestones accounts distances from Asturica Augusta instead Asturica Bracara. Near this place, Ponte Navea, in a road junction close to the parish of San Xoán of Rio, there are some milestones grouped without any remaining engraved reference.

Outside Pobla de Trives the road descends toward the Bibei River saving the steep slope between Mendoia and the river. The ramp was saved with excavations and embankments in the place now known as Los Codos, the elbows. Upon the river, the bridge of three arches of unequal amplitude, is the best preserved in Galicia. Raised in Trajan times is still in use and a column erected near the bridge attests: IMP CESAR DIVI  NERVAE  FILIVS NERVA TRAIANVS AVG OPTIMVS GERMANICVS. Another milestone recognizes Valerio Festo work: VIA NOVA FACTA C CAL RANTIO VAL FESTO LEG AVG P P and just pointing the distance remaining to the Legio X Gemina camp: AB ASTVR M P XCIV, ninety-four miles to Astorga. 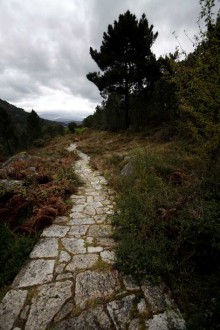 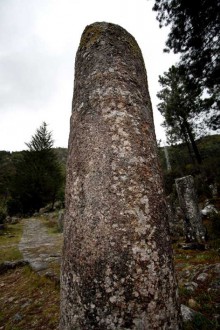