Homepage > Where the Dragon Soars

Where the Dragon Soars

More than a millennium ago, a Vietnamese emperor, Lý Thái Tổ, built a new capital for his kingdom. In a poetic outburst he named it Thăng Long, meaning where the dragon soars. Name changed more times until Western colonialism mutated Đông Kinh in Tonkin. Another less poetic emperor, Minh Mang, simplified the city name and turns it in the place between two rivers: Hà Nội.

Hanoi is a city considerably nice except for the experience in crossing a street. The best formula, although a certain amount of courage and recklessness is necessary is to move forward on the roadway with the eyes closed until reach the opposite sidewalk. The myriad of motorcyclists and cyclists foresee pedestrian movements and dodge accordingly. Start a sudden run or a sudden stop caused by panic only may become in a miscalculation therefore causing outrage.

Summarizing: a good part of the old city streets provides a welcoming shade to mitigate the humid heat meanwhile having a lazy walk. Two large parks with one each lake gives the counterpoint creating open areas free of road traffic.

In the centre of one of the latter Hoàn Kiếm Lake becomes navel and hub of the city. Tháp Rùa, the turtle tower rises gracefully on a small island in the water. Another small isle hosts the Ngoc Son Temple, the Jade Temple, accessible via a wooden bridge called The Huc, painted in a raised bright red tone. Along with the other major urban lake, Ho Tay, the West Lake, stands the venerable, at least for its age, Trấn Quốc Pagoda. This dates back to the sixth century, the reign of Emperor Ly Nam De. Its sleek tower reflected on the lake, near the sacred fig tree was brought in the form of cuttings from India. Cutting from the tree where Buddha attained enlightenment.

It’s also venerable the One Pillar Pagoda, Chùa Một Cột, built in the eleventh century during the reign of Emperor Lý Thái Tông. The Emperor dreamed on a Buddha avatar who handled him a baby while sitting on a lotus flower. Shortly after Lý Thái married and had a son. The temple was built of wood on a single stone pillar about four feet in diameter. The French pulled down before leaving the colony, after it was rebuilt. 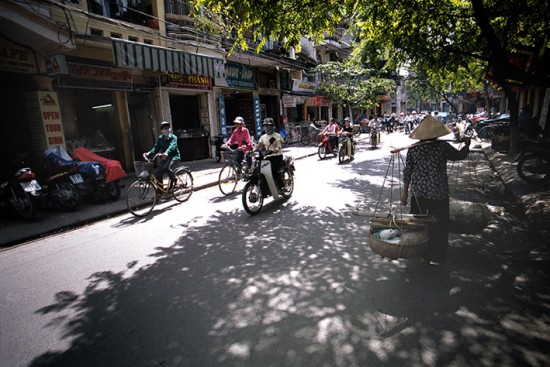 Equally old is Văn Miếu, the Temple of Literature, old school, Imperial Academy and Confucian Temple, was also the first university in Vietnam. Remained open between 1076 and 1779, when the empire's capital moved to Huế. In the inner second courtyard there are several places with evocative names: Khuê Văn Các, the Pavilion of the Constellation of Literature; Suc Văn, the doors of the Crystallization of Letters; Bi Văn the Magnificence of Letters. Vertical slabs held by stone turtles preserve the names and places of birth of more than a thousand graduates. There are even more brilliant names in the Temple of Literature, from the Gate of the Great Synthesis, Dai Thanh, to Kim Thanh, the Golden Sound, or Ngoc Chan, the Vibration or Jade.

When the French Concession was established in 1875 the city was little more than the fortified citadel of Thang Long, where the Forbidden City and the thirty or so streets that opened toward the river. To the south and to the west, beneath the lake, rice fields stretched everywhere. Much of the Imperial Citadel was demolished during an uprising against French colonial rule. In the twentieth century, during the war, American bombing gave a good account of the rest. Today the ruins are partially restored and other areas are being systematically excavated.

Under colonial rule Hanoi became the capital of Tonkin and in 1902 the capital of whole French Indochina. Most of the streets in the old town were specialized in a specific trade, each of the thirty-six streets corresponds to a different guild and commercial or industrial activity passed from generation to generation.

There were devoted to furniture and to clothing and textiles as Phó Hàng Dâo, specialized in silk products; Phó Hàng Giay, in footwear; Phó Hàng Bac in jewellery and many others where everything may be found. The specialization is still maintained but in a lesser degree. Particularly is reflected in the street names, though some, despite retaining the appellation, has changed activity such as Phó Hàng Hanh, former onions street now lined with cafes and small bars. The French also left mark on urban architecture as in the Opera, 1911, which wanted a replica of the Palais Garnier in Paris; or the Bank of Vietnam, then Bank of Indochina; in the neo-Gothic Saint Joseph Cathedral from 1886, Notre-Dame-inspired and built upon the demolished Bao Thiên pagoda; at the Presidential Palace or the historic Hotel Metropol. Another architectural landmark was the Daydé & Pillé architects iron bridge, built in 1903. At that time the Long Biên Bridge, then called Paul Doumer, was one of the longest in the entire Asian continent. Through it, over the Red River, rolled the steam locomotives linking northern Vietnam with China. For that same reason was repeatedly bombed during the war with the United States. The French had many weird ideas; one of them was to install a replica of Bartholdi’s Liberty Statue on a pagoda top. The newspaper L'Avenir du Tonkin headlined then: La Liberté sur la pagode, c’est la victoire de la lumière sur l’obscurantisme.

A few months after the end of Vietnam War was concluded the former president of North Vietnam, Hồ Chí Minh’s Mausoleum. He was embalmed in the style of other communist leaders. The visitors, mainly from the country keep long lines to enter to the central room, refrigerated and protected by a guard of honour. Under dimmed lights and beyond the glass box that encloses him is the face of the former leader. The old dragon didn’t choose their birthplace. Neither Hồ his place to rest.