Founded in New England in 1630, Boston is one of the oldest cities in the United States. The arrival of Puritan settlers, the Tea Party, the Revolution War… protagonists of the birth of a nation now lie in some of the most respected US graveyards. These were the first three.

Boston has preserved sixteen historic cemeteries dating between 1630 and 1892, most of which, over time, have become integrated into the grid of the city and, today, almost playing a role of urban gardens, are fluffing a downtown which has tended to grow vertically. In fact, already in the nineteenth century it got somehow that role of public parks and to ease the walk were made footpaths, railings and landscaping. In some cases the tombstones were rearranged in lines, so currently not always the name of the slab match to those who are buried beneath. Nowadays, the Boston Parks and Recreation Department is the responsible for the conservation of these areas managing the Historic Burying Grounds Initiative program.

The earliest burials were quite simple, barely a granite or slate head generally semi-circular marked the burial place and not much more than the name or initials and date were engraved. Eventually a couple of iconographic symbols become common on tombstones, a stylized skull, sometimes accompanied with a pair of wings or crossbones or sometimes an hourglass is also used to symbolize the transience of time and life, even with wings to indicate almost in a literal way how the time flies. On the late seventeenth century begin to appear images of winged cherubs, symbolizing the flight of the soul to heaven. Neoclassic obelisks and pedestals appear in the early nineteenth century. 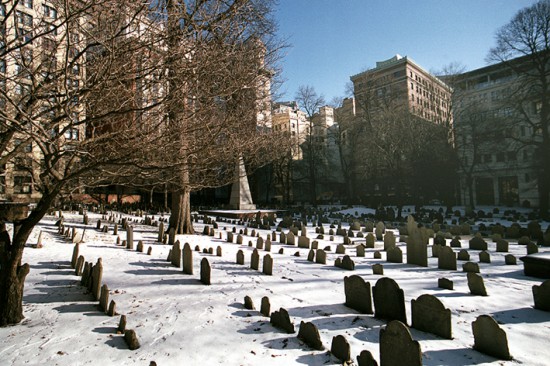 King's Chapel Burying Ground is Boston oldest cemetery, today beside Tremont Street and the Old City Hall building. It was enabled in the same year that the city was founded, 1630. The land was part of the properties of Isaac Johnson, one of the first settlers and the first to be buried in the place. In 1668 the British Governor expropriated a piece of the land to build the first Anglican Church, finished twenty years later; it was named King's Chapel. The graves are kept untidy in the surrounding terrain and the church ended up giving name to the cemetery. It is said that the first funeral was for the former owner, Isaac Johnson, but other notable rest here: Mary Chilton, who is believed to be the first woman who landed from Mayflower. John Winthrop, the first governor, William Dawes, Paul Revere partner in their ride to Lexington in 1775, William Emerson, father of the poet Ralph Waldo Emerson or Hezekiah Usher, first bookseller and publisher in the colonies.

Nearby, following Tremont Street towards the Boston Common and once across School Street is the Granary Burying Ground, opened in 1660 to relieve the problems of space in the cemetery of King's Chapel. Initially it was known as South Burying Yard and had been integrated with the park until 1737 when was built the grain depot that gave it its name. With the construction of another adjoining building was completely split from the Common. On the place where was the granary was built later the Park Street Church. In the years 1830 and 1840 some improvements were made, with the planting of some elms, the construction of the fence and adding a door of Egyptian reminiscences, designed by architect Isaiah Rogers. The cemetery was closed in 1880 when reached five thousand burials, although only 2345 tombstones and graves are counted. Here lie some of the fathers of the American nation: the three signers of the Declaration of Independence, Samuel Adams, John Hancock and Robert Treat Paine, the colonial patriots Paul Revere, James Otis and Peter Faneuil, the five victims of the March 5, 1770 Boston Massacre. An obelisk marks the grave of Benjamin Franklin's parents, Josiah and Abiah.

North of the city a small hill bordering Hull Street hosts another ancient graveyard. It’s Copp's Hill Burying Ground. In fact the second one created in the city after King’s Chapel, on February 20, 1659, and was originally known as North Burying Ground. Copp's Hill refers to William Copp, a shoemaker who settled near the present Prince Street. The cemetery was expanded several times through the purchase of adjacent plots. During the years of the Revolutionary War the British artillery battery was installed on the hill. Since there they fired at Bunker Hill in Charlestown, across the harbour. It’s also said that the redcoats employed the tombstones as targets. The cemetery was used until 1850; although there are some twelve hundred tombstones actually rest about ten thousand people, including Edmund Hartt, builder of the USS Constitution, today moored in view of the cemetery and a thousand men free and slave who fought for independence.

Copp's Hill also bounds with Snow Street, an appropriate name in wintertime, when a white blanket covers the vast graveyard and the whole city, without distinction. The tombstones contrast harder and the roaming of the squirrels looking for some to eat is recorded as tiny footprints on the snow. Boston is wrapped in an enormous white sheet. Someone throws a ball to Washington and teenagers skate on the Frog Pond in the Common. 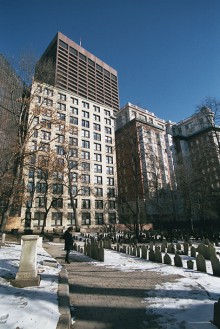